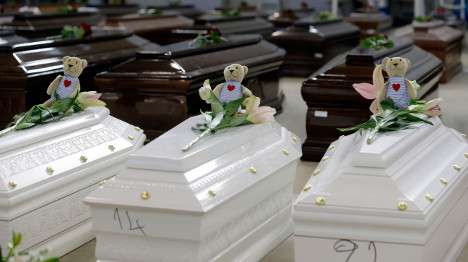 Teddy bears on the coffins of deceased migrants at the airport in Lampedusa, Italy in October 2013. File photo: AP
Reactions from Europe’s heads of state following the tragic incident where hundreds of refugees lost their lives in the Mediterranean Sea a few weeks ago have finally begun to emerge.
“Europe wakes up only when migrants are dying," Maltese Prime Minister Joseph Muscat said after the tragedy. Italian Prime Minister Enrico Letta urged the EU to do more to help the individual member states deal with the influx of migrants, and has agreed with his Greek counterpart Antonis Samaras to make EU’s migration policy one of the key issues during the two countries’ presidencies next year.
Sweden’s Prime Minister Fredrik Reinfeldt called for “comprehensive solutions” in the EU for the reception of refugees and migrants in the future in order to avoid similar incidents as those witnessed in Lampedusa.
I deeply regret, however, that only after hundreds of refugees lost their lives at once in the Mediterranean Sea has the refugee issue become a key concern for our ministers. But blaming the EU for not doing enough is incorrect.
As a matter of fact, the European Commission has repeatedly presented progressive legislative proposals to the European Parliament and European Council. But while we in parliament respond positively by uniting political groups and forming a position, member states always manage to put on the brakes. Reluctance, passivity, and constantly referring to the principle of subsidiarity mean that refugee proposals are being eroded and made ineffective.
It seems cynical that the same voices from various member states are now accusing the EU of doing too little are the same as those that repeatedly refused to give the EU the necessary tools to intervene. This applies, for example, to the expanded mandate for border control programmes Frontex and Eurosur. And let's not forget the member states’ failure to respond to the Commission’s plea for more countries to receive quota refugees.
Presently, we are working on a new proposal for rescue at sea, as well as guidelines for Frontex and member states in this mission. Again it’s the same old song and dance, however, as the member states have shown no willingness to work on this report in order to clarify who is responsible and how rescue work should be best conducted.  The only way to prevent another horrific incident with boat refugees is to create legal and safe ways for refugees to enter Europe in order to apply for asylum.
By issuing humanitarian visas at European embassies or consular offices in temporary refugee camps in third countries and by increasing the number of quota refugees, we can prevent traffickers from taking advantage of the situation. Presently, the only hope for many people is to pay up to €10,000 ($13,500) to a trafficker for a seat in one of those dangerous boats that in many cases are in no condition to make the trip across the Mediterranean Sea.
Unfortunately, too many heads of state in the EU are cowards: they do not consider themselves to have enough support from their constituents to transform their fine words about humanity and solidarity into concrete policy decisions.
Unfortunately, migrants losing their lives in the Mediterranean as they search for a better life in Europe is nothing new. According to the International Organization for Migration, since 1993 over 20,000 people have drowned in what is being turned into the dead sea. The real figure is much higher. Every day, new boats leave the harbours of the African continent. In this migration debate, people are being turned into numbers. Migrants are not commodities. They are mothers, fathers, children and friends. They deserve both their lives and a future.
Cecilia Wikström, Liberal Party (Folkpartiet) Member of the European Parliament