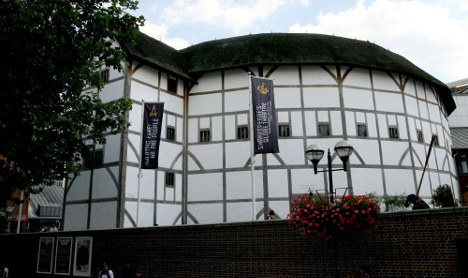 The Globe Theatre, London. Photo: Stephen Kelly/AP
The woman visited the Scala theatre in Karlstad  to see the popular Shakespeare farce, "The Complete Works of William Shakespeare".
While the play is one of the most frequently performed worldwide and the information material promised a "laughter fest not to be missed", the woman was left far from amused by her evening with the iconic English playwright.
During the performance, one of the actors is reported to have snatched hold of the woman's bag, the strap was wrapped around her wrist. Afterwards she complained to the theatre managers that she was the victim of a purse snatching and was injured. The woman has also sought treatment for pain in the hand and shoulder, the local Nya-Vermlands Tidning newspaper reported.
Despite the police report the show goes on for the play which is set to return to the Värmland Theatre in the town from November 14th.
"The Complete Works of William Shakespeare" covers the entire body of the playwright's work in a mere 90 minutes including highlights such as Romeo & Juliet, Macbeth, Othello and Hamlet.