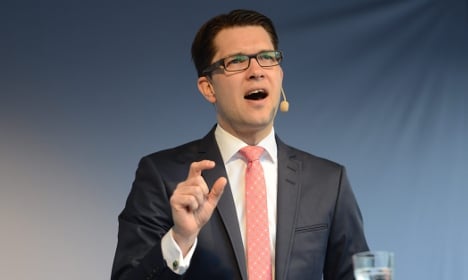 Sweden Democrat leader Jimmie Åkesson speaking in April 2013. File photo: Leo Sellén/TT
"It's quite tragic when they use their freedom to try to silence other people's opinions," Åkesson's press secretary Linus Bylund told the TT news agency.
The attack occurred around 5pm as Åkesson was signing copies of his new book, Satis Polito, under a tent set up in Nytorget on Södermalm in Stockholm (see video below).
Agents from security service Säpo quickly whisked a sullied and shocked Åkesson away from the scene.
"Åkesson ended up with a cake in his face. Then he was rushed into a Säpo car. He sat there for a while, and then they left," a witness to the cake attack told TT.
The suspected cake-thrower was a 60-year-old  woman, one of an estimated 200 or so counter-demonstrators on hand for the book signing by the Sweden Democrat leader. She was quickly apprehended by police but was later released.
Following consultations with Säpo, the Sweden Democrats opted to cut the event short in the wake of the cake-throwing.
"They said simply that we couldn't continue," said Bylund.
Police were quick to admit they had failed to provide Åkesson with adequate security.
"We and Säpo didn't succeed today," the Södermalm police field commander tweeted from its official Twitter account following the incident.
Säpo now plans to investigate how the woman, who is suspected of molestation (ofredande), was able to make her way up to the table where Åkesson was seated and how the security breach occurred.
"A criminal investigation will be launched," Säpo spokesman Fredrik Milder told TT.
On Wednesday, the 60-year-old woman admitted to the Aftonbladet woman that she had indeed hurled the cake at Åkesson and that the attack had been planned ahead of time.
She screamed that the Sweden Democrat leader was a "fascist" and that she carried out the attack to draw attention to her feeling that "Nazism and fascism are spreading across Europe".
Video of the incident courtesy of SVT