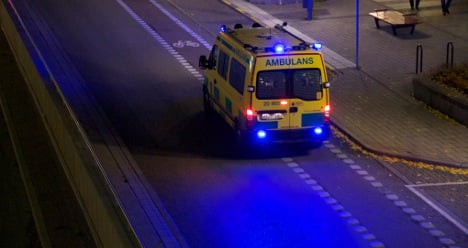 A 66-year-old man in Partille, western Sweden, called an ambulance in the middle of winter two years ago to complain of severe stomach pain. Yet on arrival, the ambulance staff failed to spot any serious condition, instead advising the patient to make his way to hospital for a more thorough examination. He died shortly afterwards, waiting for a cab in his yard.

While the fatal misdiagnosis was reported to the National Health and Welfare Board the following month, it took the authorities another year and a half to turn the investigation into suspected negligence to the Health and Social Care Inspectorate (Inspektionen för vård och omsorg – IVO).

The IVO report issued on Thursday criticized the two ambulance nurses for their failure to spot how ill the man was. The initial complaint filed with the authorities said that the patient had asked to be driven to the hospital, but the ambulance staff refused, saying "We don't do that". After they left, the 66-year-old called a taxi and walked out into the yard, where he died even before the taxi arrived.

The IVO report included ambulance documents, however, that claimed that the man himself turned down the offer of a lift and instead called a taxi. The personnel aslo noted down that they took the man's vitals but found nothing out of the ordinary. They therefore suggested he go to the hospital for a thorough investigation.

The rest of the ambulance documentation, however, was scant, as neither the man's vitals nor any identification information had been jotted down. The staff also neglected to write down a RETTS (Rapid Emergency, Triage and Treatment System) judgement, a mandatory score that rates the severity of a patient's state. The IVO concluded that the ambulance personnel were at fault for "poor documentation" at the very least, and said it appeared "highly likely" that the pair also skipped several tests.

The incident is not the first case of critique being directed at emergency services personnel. A woman in southern Sweden died in June after an ambulance failed to show up two hours after her call, and a month before two ambulance staff were fired for refusing to take a young asylum seeker to the hospital.