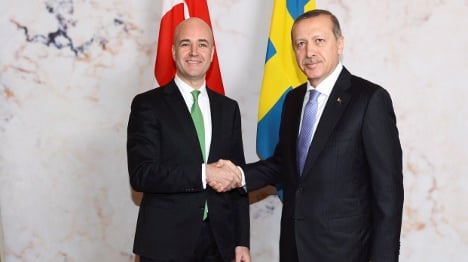 Recep Tayyip Erdogan rounded up his state visit to Sweden on Thursday, during which he met with Prime Minister Fredrik Reinfeldt. Already on the eve of Erdogan's visit, Sweden's ambassador to Turkey underscored Swedish support of Ankara's EU ambitions.

"It is not only Turkey who needs the EU as a reform anchor but it is kind of a safe harbour in a complicated region. Turkey’s membership is very important for the EU," ambassador Lars Wahlund told the Anadolu Agency on Tuesday. "The kind of EU we want to see is an EU with Turkey as a member."

On Thursday, the foreign minister chimed in.

Sweden clearly supports Turkey's EU membership ambition. Would give us a stronger Europe. And a better Turkey. In mutual interest.

The Swedish Journalists Union, however, signaled its concern that Bildt fail to talk with the visiting delegation about press freedom in Turkey.

In June, Sveriges Radio (SR) correspondent Katja Magnusson told Swedish Journalist Union magazine Journalisten that she had been roughed-up by riot police in Istanbul during the summer's demonstrations, but underlined she had not been treated worse than the demonstrators and that her press card allowed her quite expansive access.

The union issued a statement at the time, however, as a score of reporters were detained during the unrest.

"The Turkish government has shown time and time again that it does not respect press freedom and democracy," union head Jonas Nordling said in a statement. "It is completely unacceptable to arrest journalists who are just doing their job."

Had a very good meeting with Turkey PM Erdogan on a wide range of strategic issues. pic.twitter.com/RJPgFXnaw6

When The Local asked Swedish Foreign Minister Carl Bildt on Twitter, one of his favourite broadcasting channels, whether he had addressed the issue with Erdogan on a recent visit to Ankara, Bildt responded with silence.

While still skirting the issue of free press, Bildt admitted there were challenges ahead for Turkey in an op-ed published in the Dagens Industri newspaper on Wednesday. "Numerous shortcomings remain," he argued. "But it is important to see this profound and long-term process of change, which is by no means complete."

Bildt further appeared to argue that EU membership could act as a carrot for further reform work, rather than to use European hesitance as a stick.

"Following the popular protests in Turkey this summer, we should rather ask ourselves how the EU has succeeded – or failed – in exploiting its power of attraction in this candidate country, with a view to encouraging democratic reforms," Bildt wrote.