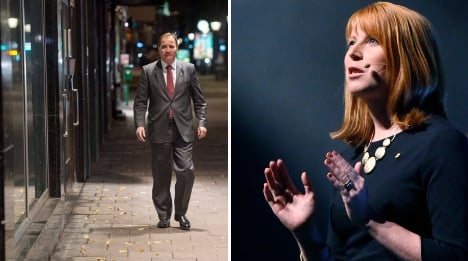 The right-of-centre government coalition has been far from alone in awaiting Social Democrat input on how exactly the opposition intends to govern Sweden next year if elections results end up in their favour. The answer finally came in the shape of an op-ed in Friday’s Dagens Nyheter newspaper, in which party leader Stefan Löfven said he would rule the land with almost anyone, apart from the Sweden Democrats, and reached out a particularly welcoming hand to the Centre Party and the Liberals (Folkpartiet).

“He has to say that. The four coalition parties have committed themselves so strongly to this alliance that they would look untrustworthy if they suddenly ditched it before the elections,” Aylott said. “They would look shifty and unreliable and opportunistic, which would be highly unlikely to bring them any electoral reward.”

What is known is that the four-party conservative coalition has begun slipping in the opinion polls, after riding high on the Social Democrat’s period of extreme turbulence between the 2010 election and the appointment in 2012 of metal union heavyweight Löfven to the party chair.

The last opinion poll by state agency Statistics Sweden was published in June this year, looking back at the spring.

“If a parliamentary election were to be held in May (2013) then the government parties would receive 40.7 percent of the votes. The Social Democrats, the Left Party and the Green Party would together receive 50.5 percent,” the statisticians summarized.

Whatever happens, the Social Democrats cannot count on a majority of the votes, forcing them to cooperate, although the cross-bloc flirt repulsed some on Friday. While many observers said the Social Democrats at least had socially liberal attitudes in common with the Liberals, the outstretched hand to the Centre Party was quickly slapped away.

Centre Party leader Annie Lööf quickly tweeted. “There are three things I really don’t like: 1) socialism 2) arrogance 3) men who don’t understand a no. I say no to the Social Democrats.”

Leftwing political commentator Eric Rosén said that while the Centre Party and the Social Democrats had made relatively easy bedfellows for a time in the 1990s, the subsequent leader Maud Olofsson had “aggressively” distanced herself from then socialist head honcho Göran Persson. If she turned the party away from their workers party buddies, Annie Lööf has hardcore hit the gas pedal, he said.

“I think the Social Democrats hope they can work with the Centre Party, but I think it’s a miscalculation,” Rosén told The Local. “The Centre Party is fuelled by hatred of the trade unions (facket), they deride it with slogans like ‘Fuck Facket Forever’.”

Rosén further said that the Centre Party’s stated support of labour migration was viewed by many in leftwing quarters as a way to pry power out of the hands of the Swedish trade unions, in effect setting sail to structural wage dumping. The Liberals were not free of criticism in that area either, however.

“Löfven doesn’t have much choice – there is no enthusiasm for repeating (former leader Mona) Sahlin’s failed strategy,” Aylott told The Local.

But what do Löfven’s party colleagues think of Friday’s op-ed?

“The Social Democrats is still a very divided party. For example on the question of private companies making profits on outsourced public services, the party is extremely divided.”

The minority Left Party has long been an outspoken critic of profit-making in state-funded welfare, but this still did not make them a strategic ally to the Social Democrats, Aylott argued, as far too many Swedish voters see them as far too left.

The real treat in store for politics buffs, Aylott underlined, was the wrangling set to take place after the September 2014 elections. While Rosén, who is editor-in-chief of leftwing opinion site Politism.se, said Löfven was unlikely to give minister posts to anyone except their main allies the Greens, Aylott said predictions were null and void until the dice are cast.

“It will be a totally different game once the elections are out of the way,” he told The Local.