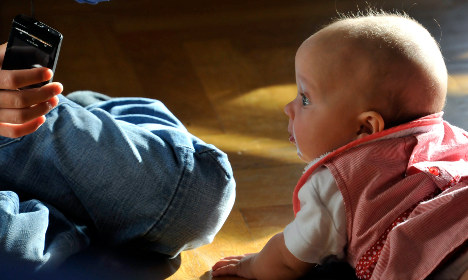 File photo: Hasse Holmberg/TT
"Mothers have their telephones accessible and when it pings with a new text message they get curious and it grabs their attention instantly," Camilla Karlsson, head of the maternity ward at the hospital in Växjö, told Sveriges Television (SVT).
Two years ago, the maternity ward began allowing mobile phones and tablet computers into the delivery room. Since then, parents have become increasingly obsessed with social media, Karlsson explained, adding that she's concerned about the effects on the newborn children. Karlsson and her colleagues are now urging parents to put their electronic gadgets aside, stop worrying about posting pics of their newborn babies on social media sites like Facebook and Twitter, and instead focus on their children, especially during nursing.
"We're going to talk more about how we deal with this," Karlsson told SVT.
A study published in the Acta Paediatrica medical journal earlier this year cited mobile phone use by mothers as a contributing factor in at least three of 26 cases when newborn babies suddenly stopped breathing.
"Previous studies have shown a relationship to a moment of distraction, like when a mother is lying down and being stitched up. But mobile phones can also be a distraction," paediatrician Eric Herlenius told the TT news agency in May in conjunction with the publication of the study, which analyzed data on 68,364 births in the Stockholm area.
"Of course people want to share their news with the world, but someone should always have their focus on the baby."
But child psychologist Malin Bergström doesn't think parents should be too concerned about grabbing an iPad or smartphone as soon as their newborns emerge into the world.
"It's positive that parents have a social network and it's good for the child too," she told SVT, adding that parents are best in a position to judge how much they use their phones in front of their newborns. "There can be a risk of depression if a parent doesn't have their social network around them. I think we should look positively on parents that want to share news of their newborn child."