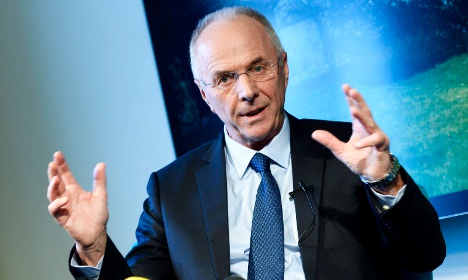 Sven-Göran "Svennis" Eriksson speaks to reporters in Stockholm about his autobiography. Photo: Claudio Breschiani
The story was cut from every single edition of his new autobiography, entitled Svennis, except the one published in Norway. The escapade described in the book begins as a night out on the town with former IFK Gothenburg player Glenn Schiller. It ends in the flat of one of Schiller's female friends.
"We soon found ourselves naked on the sofa," Eriksson writes in his matter-of-fact style. "She had not said anything about being married but suddenly the door opened and there was a big man: 'Who the hell are you?'"
Norwegian publishers Gyldendal have admitted to the "embarrassing" error.
"It's a mistake and it's completely our fault," Jan Swensson, Gyldendal's editor-in-chief for non-fiction, told The Local.
Visit The Local Norway for more details about the unauthorized tête-à-tête and what Gyldendal plans to do about it.