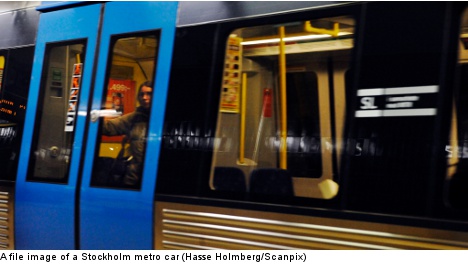 "In practice, new housing that's almost the size of Uppsala is being created," the leaders of the four parties that make up the centre-right Alliance government wrote in an opinion article published on Monday in the Dagens Nyheter (DN) newspaper.
The government leaders report that the Stockholm-area municipalities of Nacka, Solna and Järfälla, as well as the city of Stockholm, are in agreement about the projects, which call for the building of 78,000 new homes in Stockholm County.
The Stockholm County Council also backs the deal, which is outlined in DN by Prime Minister Fredrik Reinfeldt (Moderates), Enterprise Minister Annie Lööf (Centre Party), Education Minister Jan Björklund (Liberal Party, Folkpartiet) and Social Affairs Minister Göran Hägglund (Christian Democrats).
"The agreement presented today includes nine new metro stations, with lines toward, for example, Nacka Forum, Arenastaden, and Barkarby," they wrote.
Investment in new stations, vehicles, and depots is expected to land around 25.7 billion kronor ($3.9 billion).
Financing will come via contributions from the various parties involved in the projects, as well as through an increase in the congestion tax charged on vehicles entering the city centre.
Municipalities will take the lead on new housing construction, with party leaders claiming it will entail "nearly twice as many homes than has been mentioned previously".
Part of the justification for the deal is the continued growth of Stockholm's population, which is expected to increase from 2.1 million to 2.6 million people by 2030.
Specific measures include extending the blue line metro past Kungsträdgården with five new stations: Sofia, Hammarby kanal, Sickla, Saltsjö-Järla, and Nacka Forum. A new stretch will also be built connecting the blue line's planned Sofia station with the Gullmarsplan transit centre on the green line.
North of Stockholm, the blue line will be extended past Akalla and connected to the commuter rail line at Barkaby Station, with a stop at the Barkabystaden district currently under construction in Järfälla along the way.
From Odenplan, a new branch will be built with two new stations, Hagastaden and Arenastaden.
The government leaders see the efforts as a key step in ensuring Stockholm remains a competitive and dynamic city, and a driver for Sweden's economic growth.
"The Stockholm region accounts for nearly one third of the country's total job market. The region is very important for the entire Swedish economy," they wrote.
The construction is set to begin in 2016, and the first expansion will be towards Hagastaden, completed around 2020. The blue line's extension towards Barkaby will open about 2021, and the Kungsträdgården-Nacka line is planned to be completed by 2025.