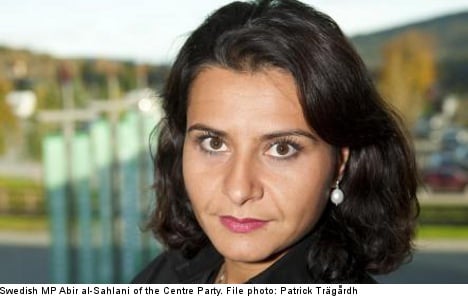 Al-Sahlani, 37, is suspected of fraud in relation to two democracy projects in Iraq run by the Centre Party. The projects, which took place in 2009 and 2010, were funded by state money from the Swedish International Development Agency (SIDA). An estimated 3.2 million kronor ($480,000) of aid money is unaccounted for according to Swedish Radio's Ekot programme.

A statement posted on the Centre Party's website said that Al-Sahlani was taking a "time-out" and added that it was because of "deficiencies in the financial records concerning an aid project in Iraq."

Both Al-Sahlani and her father Abid handled the aid project in Iraq where they were both born.

The police were notified last year by the Centre Party's international foundation after serious discrepancies were discovered in the projects' final accounts. State prosecutor Staffan Granefeldt at the Swedish Economic Crime Authority has conducted interviews with key people involved with the Iraqi aid effort.

In a statement on the Centre Party website it said Al-Sahlani was taking a break from politics following the fraud probe and won't participate in any parliamentary work while the police investigation is going on.

A resident of the south Stockholm suburb of Hägersten, al-Sahlani was born in Iraq and launched her career in politics in Härnosand in northern Sweden as the youngest representative on the governing board of the local Centre Party chapter.

Al-Sahlani has yet to be charged with committing any crime.