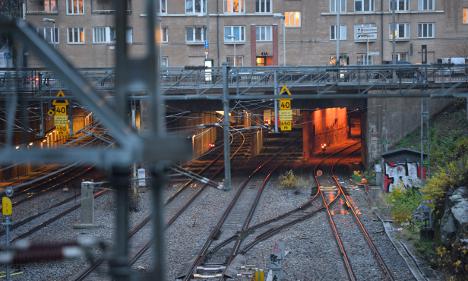 The tracks leading to where the derailment took place. Photo: Henrik Montgomery/TT
"It will take a long time to repair the damage caused by the derailment. It could take several days or up to a week," said Denny Josefsson of the Swedish Transit Agency (Trafikverket) to the TT news agency.
The derailment occurred around 6.30am when a cargo train jumped the tracks about 200 metres north of Södra Station. The train then struck and damaged a pillar.
"There can be a risk of collapse," police spokesman Sven-Erik Olsson told TT.
A commuter train traveling behind the cargo train was left stranded on the tracks, with plans for it to travel in reverse back to the station.
The cargo train wasn't carrying any dangerous cargo and no injuries have been reported.
Twenty-five emergency workers were quickly on the scene at Södra Station, which was cordoned off.
"We want to be sure there won't be a collapse, but nothing has collapsed yet," Ulf Tholén of the Stockholm fire brigade told TT.
In addition to commuter rail traffic, long-haul passenger rail has also been affected, with national rail operator SJ hoping to redirect trains to and from Gothenburg through Västerås, while trains to and from Malmö can turn at Södertälje, and trains to and from Eskilstuna can turn at Flemingsberg.
"There are going to be major delays," SJ spokesman Anders Edgren told TT.
All commuter rail traffic north of Stockholm was stopping at Central Station, while trains to the south were diverted to Alvsjö. Extra buses were put in service to help deal with the delays.
"It's going to be a terrible rush hour, but we hope things will work as well as possible," SL spokesman Bengt Stenberg told TT at the peak of the crisis.
According to Sveriges Television (SVT) all train services will remain grounded until at least the afternoon.