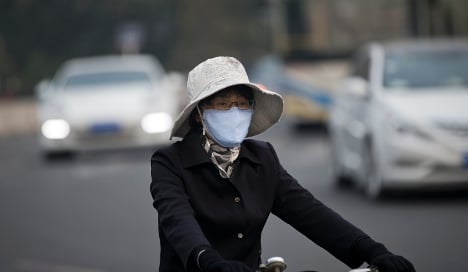 A cyclist in Beijing wears a mask to avoid the polluted air. Photo: AP
Gothenburg-born Dusan Stojanovic is an investor extraordinaire. With investments everywhere from Stockholm to Beijing, he's now based in the Swedish capital after 16 years abroad, enjoying the fruits that come after investing since 2004 in 14 companies, five of which have been exited.
The founder of True Global Ventures, which invests in proven entrepreneurs, Stojanovic was on hand as a guest speaker on Tuesday at the SIME internet conference in Stockholm. The Local caught up with him afterwards to learn more about the burning issues for him right now, and to try and find out the secret to his success.
"I believe a lot in Swedish-based clean tech, and I think there's a huge opportunity for these kinds of companies, especially in Asia," he begins.
"For me, it's more of a passion, I'm not sure if I'm gonna make money off it, but if I want to be successful in somewhere like China then I have to offer them something that they really need – and they really need [clean tech], " he says, noting that the pollution in Beijing is so bad today that people are walking around with gas masks.
"There are even apps comparing pollution levels on different quarters of the city. It's a huge problem that is concrete and unprecedented."
Stojanovic plans to head to China in December with Swedish tech companies in the hopes of "building a bridge" between Stockholm and Beijing in terms of green tech, he explains, adding that China could learn a lot from Sweden on the topic.
"Something we desperately need is to clean the air and water in Beijing, which I hope would lead to more sustainable growth. It's all about this planet if we want long term change," he explains. "Helping China with sustainable growth is the key thing we can give to them, and hopefully it would also lead to a better partnership with China, a closer relationship as partners."
So what does the Swedish angel, who speaks six languages and is a distant relative of Serbian inventor Nicola Tesla, advise others who might want to follow in his footsteps?
"You need to build a business, be an entrepreneur, and you can't be afraid of making mistakes. I made a lot myself, and they are a much better learning curve than any university degree, any MBA, any kind of trainee programme at a corporation," he says.
"Just don't be afraid. Take the risk and don't be afraid of telling people you've failed; we've all failed – multiple times – before becoming successful, and it's the best way to learn."