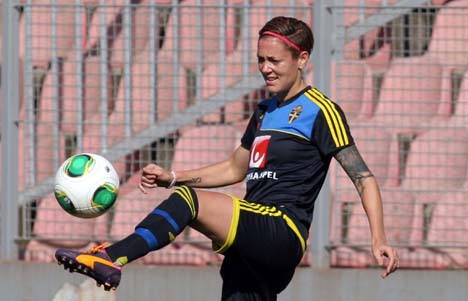 Sjögran, who has clocked up a record 187 appearances for Sweden's ladies team, was overlooked at the annual Fotbollsgalan ceremony on Monday.

The snub was brought into sharper focus when Anders Svensson, who has 146 caps for the men's team, was given a Volvo for breaking Thomas Ravelli's previous record.

All the drama unfolded on live television with Sjögran in the room and generated outraged editorials in support of the 36-year-old midfielder prompting red faces at the Swedish Football Association.

Now a car manufacturer has stepped forward to honour Sjögran but it's not Sweden's Volvo but France's Peugeot.

"We are incredibly impressed with Therese Sjögran and Anders Svensson's contributions to their respective teams. For us it is obvious that Therese Sjögran should get a car," said Maria Lantz of Peugeot Sweden to Resume.

The Swedish Football Association defended the blunder saying they never meant to overlook Sjögran and said the recognition for Svensson was because he was due to retire whilst Sjögran is still playing.

Sjögran herself initially kept quiet about the incident but was moved to say "If they honoured him, they should honour me," to Sveriges Television (SVT).

She also retweeted a tweet to her 3,000 followers (above) on Twitter labelling her snub as a "joke."

Others weren't so quiet with car recipient Anders Svensson saying "she can have my car" to Aftonbladet while even Zlatan Ibrahimovic said his fellow native of Skåne also deserved a vehicle.

"In retrospect we probably could have communicated it better and more clearly," said Swedish Football Association chairman Karl-Erik Nilsson to SVT.

Sjögran will take to the pitch for the first time since the saga on Wednesday when the LdB Malmö ladies side takes on Wolfsburg in the Champions League. The midfielder was a key player in the southern club's recent Swedish league title success.