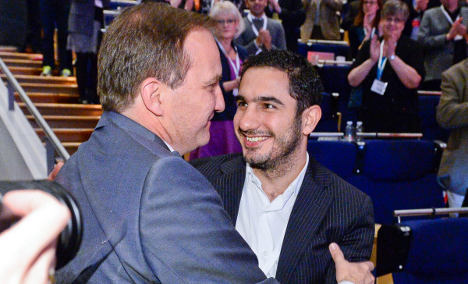 Stefan Löfven congratulates Ardalan Shekarabi upon his election to the executive committee of the Social Democrats' governing board in April 2013. File photo: Claudio Bresciani/TT

In the Stockholm electoral district, two current MPs with strong union ties –  Börje Vestlund, 53, and Teres Lindberg, 39 – have been shuffled so far down the party's electoral list they are not likely to make it back into parliament.

The party defended its move to make its representation more in tune with multicultural Sweden.

"It has to affect someone," party greyback and electoral chief Bosse Ringholm told Dagens Nyheter (DN) newspaper on Wednedsay. "Middle-aged people have had to move, people around 50 who have been dominant on the lists for decades."

The party's Stockholm municipal district head Veronica Palm also defended the ambition, which nonetheless has its critics. Earlier in the summer, when the main opposition party began its internal recruitment drive, party members began discussing the new quota system in earnest, including the congress decision to make sure one in four candidates was younger than 35.

"There are a lot of people between the ages of 40 and 50 who have long waited for the babyboomers to retire," a party member told The Local. "They are not happy having to let in young talent who haven't had to show the same patience as they."

Twenty-four-year-old law student Lawén Redar has been moved up to eighth place in the parliamentary list for Stockholm. If the Social Democrats do as badly as last time in the elections, however, she may not make it to parliament. Higher up on the list, and the only non-Nordic origin candidate in the top six, is Syriac-Swedish lawyer Emanuel Öz.

The problem in Stockholm is that it's a natural seat for not only the party leadership – with chairman Stefan Löfven and party secretary Carin Jämtin at the top – but also for candidates with long experience from the political arena, like Ylva Johansson.

Quotas are nothing new to the leftwing party. Back in the 1990s, due to its bombastic women's wing, secured the "every second place for the ladies" approach to its electoral lists – Sweden has proportional representation, rather than the UK constituency model. The push to diversify the Social Democrats' lists with candidates of different  origins is new for the 2014 elections, however, as the party tempts to pry power out of the hands of the conservative government that has ruled Sweden for seven years.