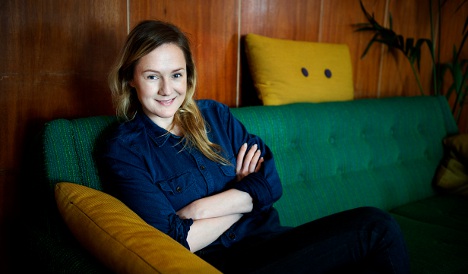 Thomsgård, 36, founded Equalisters (Rättviseförmedlingen) in 2010. The idea was simple: men get too much space in the public arena. They talk, they comment, they pontificate left, right, and centre, and despite an abundance of equally eloquent and competent women, men continue do dominate the screens, pages, and stages of Swedish public debate. Are female experts somehow considered less "expert"?

"It's an old habit," she tells The Local when asked to explain why journalists in Sweden so often seek comment from male experts.

"We're all so shaped by gender stereotypes about who should do what. And if you've always seen experts that are men, it may be a bit more annoying, or even scarier, to instead look around and ask a woman."

It's not so much that women are bad at marketing themselves, but rather that "both women and men are better at marketing men", she adds in explaining Rättviseförmedlingen's role in shifting the balance.

"That's why we must be there and make people aware, to get people to think again and not just follow instincts that are so influenced by existing prejudices and stereotypes," she says.

Marketing happens to be Thomsgård's profession. As well as giving seminars the width and breadth of Sweden, she's the publicist for Swedish megastar singer Robyn and the Swedes' favorite returnee-expat author Bodil Malmsten, who has beguiled Swedish readers with her tales of setting up a home in France. Other clients on the list include the Tom Tits natural science museum in Södertälje as well as Stockholm Art Week.

Beyond her success in public relations, however, it is Equalisters that has made Thomsgård something of a household name. The non-profit organization's Facebook page regularly sends out requests for help in finding female experts. One recent plea reads:

"Odds makers in the papers and on TV are almost always men. We of course think there are professional odds makers who know about trotting and would like to help newsrooms find them? Do you know any?"

Equalisters life blood is its 45,000+ followers' enthusiasm and knowledge. Just two hours later, this was submitted:

"I happen to know that the BEST commentator (of men and women) is Anette Lennon (….) she is as it happens to be a commentator rather than an odds maker, but her tips often win…"

Last month, Thomsgård was front and centre for the launch of the "A-märkt" campaign in which four Swedish cinemas started to rate films according to whether or not they passed the so-called Bechdel test for gender bias.

"Since we work to spread knowledge and point out skewed views and highlight alternatives, we wanted to be a part of launching A-märkt," she says.

"It's an easy, thought-provoking, and clever way to reveal what's skewed in the film industry.

"The point was to consciously get people to start talking," adds Thomsgård. And in light of all the international media attention the campaign generated, "it feels like our mission is accomplished".

Equalisters aims high. A few months ago it asked its fans to submit names of women who could take over a top job at the prestigious Stockholm School of Economics, the latest in a three-year campaign to have more women at the top of Sweden's most prestigious business school that has yet to bear fruit.

"Some nuts are harder to to crack than others," says Thomsgård, although it remains to be seen if Equalisters list, completed in early November, might have some effect at the school.

"The school has had a man as principal since 1909," Equalisters points out, before proposing, among others, SEB bank's chief economist Annika Winsth, former Riksbank board member Barbro Wickman-Parak, former Body Shop CEO Britt-Marie Börjesson, and former state auditor Eva Lindström.

But the organization itself began, as it turns out, with music. According to Thomsgård it was a lack of female DJs that inspired her to create Equalisters, which brings to mind the classic quote from the anarchist Emma Goldman: "If I can't dance, it's not my revolution."

"It was when an agent for the hundredth time said that they don't book any women because 'there aren't any' and later followed up with 'and we had a woman a few months ago, but it didn't turn out as we expected'," she recalls.

She says women wrongly end up on the short end of the stick compared to men when it comes to people's perceptions.

Thomsgård tried to get out and lecture at least once a week, not only because it "pays well" but also because it's important to spread the message of Equalisters. But her efforts aren't without consequences. She's been forced to have an unlisted phone number. But she doesn't let her critics go unanswered.

"I Google everyone who writes me and find their number and call them up, every single one," she says.

"That leaves them flabbergasted, believe me."