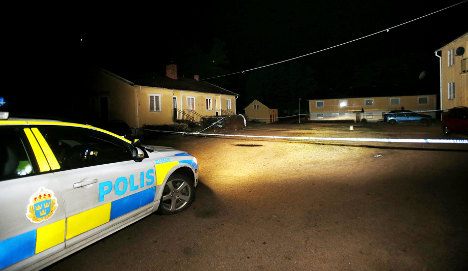 The incident occurred on Tuesday night, when residents at an asylum seekers' home in Geijersholm in central Sweden complained to police that a man was threatening them with a knife after drinking too much alcohol.

Police arrived and shot the 45-year-old man, who hailed from Somalia and had been in Sweden for two weeks. He died later that night from his injuries.

A spokesperson from the police was tight-lipped about details of the incident, but witnesses told the Expressen newspaper on Wednesday that police were quick to shoot the man.

One witness, a 20-year-old who lives nearby, said that the officers shot the man twice without firing any warning shots. The witness indicated that the shots were directly at the man's chest.

"You get shocked and stressed when something like this happens so close to you. It has been so calm and safe around here," he told the paper.

He explained that when police arrived, a friend of his warned officers that the drunken man was wielding a knife.

"He was standing by the door (…) but didn't seem to be paying any attention to the police. Then he turned around and started running at the police. The police shot. Then he was just down on the ground, they shot him," he added.

The block of flats where the shooting occurred is a former residential centre for pensioners, dubbed Paradise by local residents, some of whom heard the shooting. They are rented as more permanent housing where new arrivals can live on their own, as opposed to temporary housing facilities where several refugees are housed in one facility.

Police will launch an internal investigation into the incident.