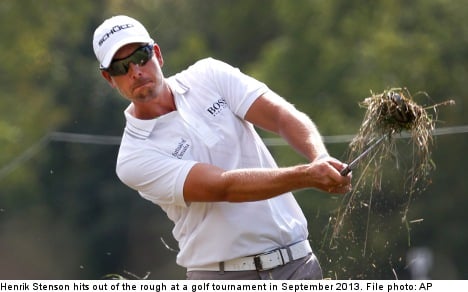 Despite a persistent wrist injury, Henrik Stenson is hoping his purple patch of form will last one more week as he aims to win the DP World Tour Championship and the honour of becoming Europe's new number one player.

The 37-year-old, who is aiming to become the first player to win the FedEx Cup on the PGA Tour and the Race to Dubai on the European Tour in the same year, is leading the standings going into the final week of the season.

He is one of the three players in control of their own destiny, while the next eight players have a mathematical chance of overtaking him. Stenson, a long-time resident of Dubai before shifting to Florida earlier this year, enjoys a lead of 213,468 euros over second-placed Justin Rose, while number three Graeme McDowell is behind by 321,800 euros. But with the top prize this week worth 985,476 euros, the Swede is well aware of the challenges he faces.

Stenson, who finished tied seventh last week in Turkey in a tournament where his closest rivals Rose and number four Ian Poulter were in contention, said: "I felt lucky last week.

"I thought it could have been a whole lot worse for my positioning in Turkey, but things worked out pretty well there, so I am still leading. "(Being European No1) is always one of the things that I would have liked to achieve in golf. Growing up on the European Tour and playing here for many, many years, it would mean a lot to be the overall winner of Race to Dubai.

Stenson has been suffering with a wrist injury before the start of the Final Series – the BMW Masters in Shanghai – but he is hoping the two days of complete rest and physio work after Turkish Open will help him squeeze in another week before making a decision about the rest of the year.

"Right now, I'm just focusing on getting through this week and then I will have to take a further look on my schedule. I'm scheduled to play a couple of weeks in the next month, and I will have to look and see if that's going to be possible."

Meanwhile, McDowell reckoned the fact that he did not have a very good history at the Earth course will not hamper his chances, as he has been getting better with every year. McDowell, who finished tied 11th last year for his best result at the venue, said: "I do feel like every year I've come back, I've kind of got the hang of the Earth course.

"It's typically come down to putting for me on this golf course. I come here with an open mind this week. I come here certainly as a player who I feel is getting better and learning, and I'm experienced enough to not write myself off around a golf course until I've had a few rounds under my belt." The $8 million tournament starts Thursday.