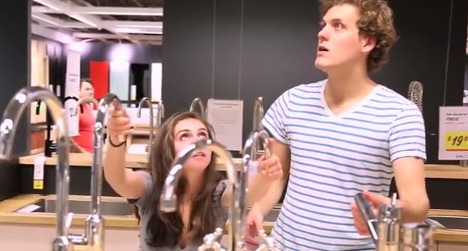 For some, shopping in Ikea is a nightmare at the best of times. Endless shelves of Scandinavian goods with Scandinavian names. Screaming kids. Confusing arrows. And the only thing worse than spending an entire afternoon there is… you guessed it… getting lost there.

And that's the exact basis of a short film by director and writer Daniel Hubbard that's gone viral on YouTube this week. It was published on Monday and has almost gained half a million views. The film is titled Alfonso Cuarón's Ikea, and is a direct copy of the blockbuster space epic Gravity starring George Clooney and Sandra Bullock.

In the clip, below, a couple get separated shopping at an Ikea outlet, and try to maintain telephone contact as the woman goes spinning out of control. "Give me a visual, anything," the man commands, only for his female counterpart to panic while trying to pronounce Ädel, one of Ikea's bookshelves.

Staff at Ikea in Sweden are impressed by the short film.

"We think it's fun," Johanna Blomkvist, spokeswoman at Ikea Sweden, told The Local.  "Parody is a kind of flattery so we enjoyed it."

When asked if, as the clip suggests, life in Ikea is indeed "impossible", Blomkvist can only laugh.

"I don't think it's impossible, but Ikea is very big, and it can be hard to find things sometimes."

See the two trailers below and compare.