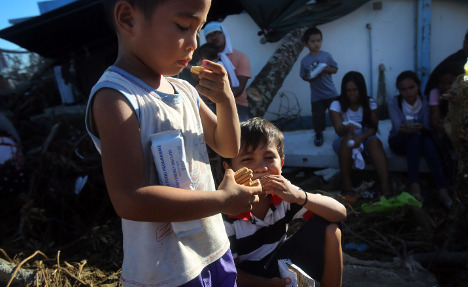 Children in the Philippines. Photo: AP/TT

The corporate social responsibility wing of the Ikea empire, the Ikea Foundation, decided to donate the sum to Unicef, the UN agency responsible for children's welfare. Initial estimates said some four million children could have been affected by Super Typhoon Haiyan, which devastated parts of the island nation.

"We provided cash assistance so Unicef can buy the kinds of supplies most needed by the children right now, like water purifiers, nourishment, medical supplies, etc," Ikea Foundation spokesman Jonathan Spampinato told The Local via email on Friday.
He said that partnering with Unicef (the Ikea Foundation is its biggest corporate sponsor) ahead of other agencies with relief capacity was, "simply put" due to Unicef's "competence and speed".
Yet speed is not the only value as the world rallies to help the typhoon victims. So is size. On Friday, as disaster relief bids started accumulating,  a quick tally of which donors were attempting to ease the crisis showed that the Swedish furniture makers far outdid Philippine regional neighbour China's aid –  $1.6 million compared to the Ikea Foundation's 2.7 million.
"China's pledge, which it boosted after getting flack for its original offer of $100,000, is a fraction of the amounts pledged by other countries in the region and much farther away, including the USA," USA Today reported on Friday.
The Americans have decided to give $20 million, while the Australians promised $30 million. Further afield than the Asia Pacific region, the UK pledged $16 million and the UAE $10 million.
The Ikea Foundation declined to comment on whether the devastation in the Philippines meant it could test its flatpack homes on the ground.