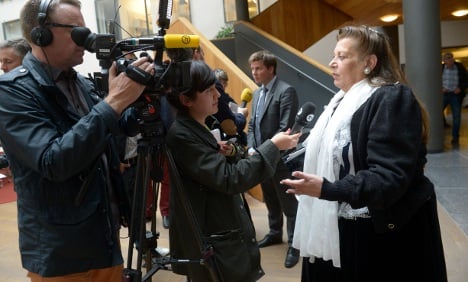 Rosita Grönfors after meeting with the integration minister (in the background) to discuss the database. File: TT

The list, which was dubbed ”kringresande” after the old-fashioned Swedish term for travelling communities, was established for no clear reason, the Swedish Commission on Security and Integrity Protection (Säkerhets- och integritetsskyddsnämnden – SIN) noted in its ruling.

"An undefined purpose gives no framework to the personal data, which in practice undermines the protection of individuals' integrity," the ruling read.

The official SIN review looked into a random selection of 1,235 of the total of 3,413 people on the list who were not children. The list also included deceased persons that were not included in the review.

The revelation that the database existed, however, was deemed so problematic that the police themselves reported its existence to the police. Sweden's National Police Commissioner Bengt Svenson soon responded by demanded that all of the country's police heads go over their own databases.

"I hope and pray to god that this is the only registry of this kind," he said at the press conference last month. "It's upsetting. This is completely unacceptable and I cannot understand the purpose of it."

Further critique made public on Friday was how the datebase was put together. It was unclear why names were logged and it was not clear if person in the list was suspected of crime. There was no clear link between the names and criminality, the report found.

While the domincance of Roma names could "give the impression" that its sole focus was ethnicity, SIN found that the original intention was to map social and family networks around persons suspected of crime.

SIN will now await word from Skåne County police on how they intend to deal with the database.