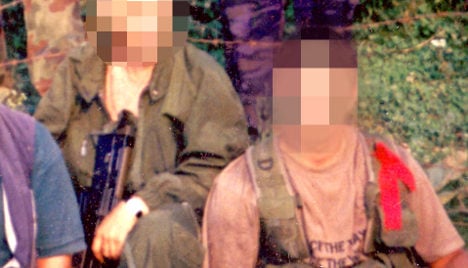 The Swedish citizen, right, identified as a suspect. Photo: Human Rights Watch
The man is reported to live in a town in central Sweden. He is a Swedish citizen and originates from Kosovo.
It is understood that the man has been formally identified as a suspect as charges are pending. The man has previously been interviewed by Serbian and Swedish investigators. In 2010 he was arrested but was released quickly and discounted from the Swedish investigation.
The case relates to an incident in the village of Cuska where 41 civilian Albanians were killed by Serbian resistance.
"He has confirmed that he was in the village that day and was involved in the operation, but we couldn't confirm the nature of his involvement," explained Swedish war crimes investigator Sven-Åke Blombergsson.
Since the man is a Swedish citizen, he can not be handed over to Serbia. An acquaintance of the man, a Kosovo Serb living in Sweden, was convicted in 2012 in the district court of complicity in the massacre, but was acquitted in the Court of Appeal.