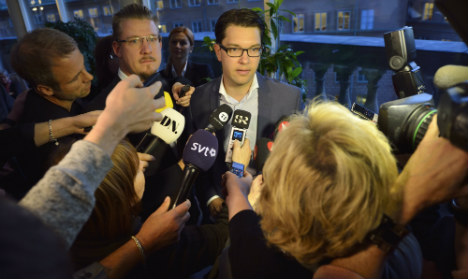 In an interview with the Svenska Dagbladet (SvD) daily, Åkesson explained his frustration over the party's lack of influence in parliamentary matters and promised to place more focus on issues other than immigration.

"If there is a stalemate and this is the issue that is referred to, then there could be an opening for long-term dialogue by starting to talk about something else," he said, while stressing that the party are not about to let the issue rest as "it is important for our voters".

Åkesson explained that the party would instead focus on issues such as staffing levels at nursing homes and to push for the right to part-time workers to move up to full-time.

No mention however was made of whether the new approach to immigration would also be reflected on Sweden Democrat-backed websites which focus exclusively on the issue.

According to a slew of recent opinion polls, the Sweden Democrats are in line to improve on their 5.7 percent showing in the 2010 election. A Sifo poll on Sunday indicate that the party is supported by 9 percent of the Swedish electorate.

While support for the party has increased, despite a number of high profile setbacks among which the so-called iron pipe scandal stands out in particular, both Moderate leader Fredrik Reinfeldt and Social Democrat leader Stefan Löfven have ruled out negotiating with the party.

"To those who care about Sweden, don't vote for the Sweden Democrats. Don't release the hatred," Fredrik Reinfeldt is quoted as saying.

Åkesson expressed dismay at Reinfeldt and Löfven's tough talk, which he dismissed as "small-minded pride".

"Both of those gentlemen want to be prime minister. If I had been in their situation I wouldn't have cared about the small-minded pride which is shown in their attitude towards us," he said to Svd.

According to Sunday's Sifo poll the Social Democrats would face a simple choice if the poll reflected the election result in 2014 – to rule in minority with the Green Party or form a majority government with the Greens and the Left Party.