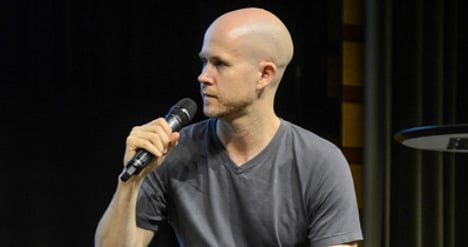 Tech guru Tyler Crowley in action. Photo: Private
Los Angeles-native Tyler Crowley came to Sweden to experience the Swedish summer and get a better look at the start-up scene in the capital. Like many others, he got hooked. One year on, he's found himself working with the Swedish government as it builds up Sweden's tech scene and organizing the biggest tech events in the country.
When The Local caught up with Crowley at the SIME tech and media conference in Stockholm, he explained why the Swedish capital is leading the way in the tech world, even if that fact is still largely a secret.
"In terms of the tech scene, Stockholm happens to be the best anywhere on earth right now," he tells The Local.  "Everyone knows Silicon Valley, LA, New York… but I came to Stockholm not knowing what was here and, my God, it was like walking into the best hidden restaurant or the world's coolest nightclub that no one knows about."
Crowley attributes the success of Stockholm to the city's strong universities, an excellent influx of talent from abroad, and a peculiar habit of the Swedes:
"Yes, the Swedes are a bit modest," he explains. "They don't focus on marketing so much, they focus on the product. Which is probably why it's actually so good here. The way the web and apps are evolving, you need a great product. It's not so much about the marketing anymore – it's about letting the users do the marketing for you."
In fact, Stockholm currently has a stronger resume than any other city on the planet, Crowley believes, pointing  to examples like music-streaming service Spotify, Candy Crush creators King, gaming giant Minecraft, and e-payments provider Klarna – "one of the next great tech companies".
"There are few cities in the world where you can say: 'Name four incredible, game-changing companies that are impacting everyone globally'. New York might have two, LA might have two, but Stockholm has four," he trumpets, but adds that most people don't even know, for example, that Candy Crush is Swedish.
"It all goes back to Swedish lack of marketing sense. It's the jantelagen thing holding them back, they feel embarrassed talking about these great companies, that's their natural sensibility to downplay things. Tech in the American sense is the opposite, very marketing driven. You could argue that Apple is the best marketing company in the world. It's a great product, no doubt, some of the most cutting edge marketing the world has ever seen."
In terms of education, Crowley points to a mixture of talent from places like the Royal Institute of Technology (KTH), Stockholm School of Economics, Berghs School of Communication, and Hyper Island, which he says results in excellent start-ups when you get a few of the graduates in the same room.
"And then you also have awesome immigrants here from all over, India, China, the Middle East – a lot of them have deep engineering talent already, that helps too," he adds.
Now, Crowley is keeping busy helping the government's tech scene evolve, and preparing for his next tech meetup on November 25th, which this month features insight from investing experts Northzone (more info here).
So what is Crowley's advice for anyone else who finds themselves in Sweden?
"Use meetup.com, there are lots of really good meetups around town, everything from learning Swedish to social things, even Swedish things. I feel like at the end of the day, there are a lot of things here that are based on networking, not just when it comes to your career, but even things like apartments. All  the juciy details about getting into the system involve knowing people, and meeting them face to face," he explains.
And what next for the man that the Svenska Dagbladet newspaper refers to as the "start-up whisperer"?
"I've got a massive tech event planned for early next year that will make America stand up and take notice," he teases.
Besides promising the event, scheduled for May, will "shake techies around the world" and involve several large companies, Crowley remains tight-lipped about further details.
Perhaps Stockholm's secret tech habits have rubbed off on the American already.
Oliver Gee
Follow Oliver on Twitter