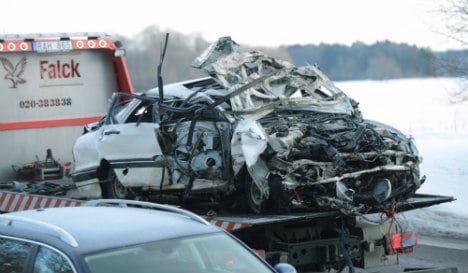 The wreckage of the car after it was pulled from the water. Photo: Fredrik Sandberg/TT

The incident in March occurred as police were chasing the suspected thieves, who had been reported for driving off from a petrol station near Uppsala in eastern Sweden without paying.

In an effort to stop the suspects' escape, police called ahead to operators of Hjulstabron, a drawbridge near Enköping demanded that they opened the bridge and close the road.

But the thieves either didn't slow down or decided to crash through the barricades and then drove off the open bridge and into the icy waters below.

Divers recovered the bodies of the two suspects, a 20-year-old father and his 21-year-old friend early the following day.

Prosecutor Håkan Roswall argued on Tuesday that the police officer should not have decided to open the bridge. The action was "not defensible," according to the charge sheet.

Firstly, the instruction was associated with excessive risks in relation to the crimes the men are suspected of, and it was not "extremely necessary" to stop the car.

Roswall furthermore argued that other options were available, such as a nail mat.

The officers deny the charges.

The men, who remained stuck in the car as it fell to the water and drowned, were suspected of having stolen petrol worth the total of 228 kronor ($34).

The incident occurred in Enköping on the night of March 11th this year.