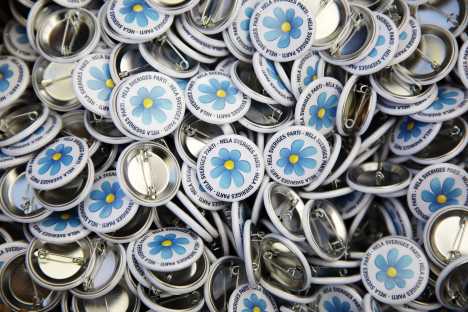 Eva Cooper, the journalist who penned the new report "Folkhem Populism in Practice" (ed's note: Folkhem is the old Swedish term for the welfare state), examined the party policies on labour, taxes and welfare. She found a mixed bag. The ensuing panel, with reporter Ann Tiberg and author Marcus Uvell, also tried to locate where on a traditional left-right political scale one can place the Sweden Democrats.

Being a one-trick pony has its problems and according to the report, the party has tried to place itself in the political middle in other areas in order not to scare off voters. In her report, Cooper identified three subsections of Sweden Democrat voters – former Social Democrats (workers' party), former Moderates (conservatives), and former non-voters.

The average voter is male, European-origin, and working class. Not surprising, author and debate panelist Marcus Uvell pointed out at Tuesday's event.

"Across Europe, 'fascism' is driven by white working-class men," he said, embracing the word fascism with an air quote. Yet he was also quick to debunk the idea that all Sweden Democrat voters are racists. "Maybe 2-3 percent of the Swedish population are hardcore racists. Others may be prejudiced or feel fear and worry. They might be scared of Islam, but have nothing against a person with darker skin."

Cooper added that many readers who contacted her, in her role as political editor at a local paper, pointed out they weren't really voting for the Sweden Democrats, but were disgruntled with mainstream politics and thus "voting against the other parties".

TV4 News political reporter Ann Tiberg, one of the panelists at Tuesday's debate, said an opinion poll carried out by the party itself a few years ago found 25 percent of the Swedish people were "potential" voters. How to appeal to that one in four Swedes demographic? the party asked itself. One way was to not be a one-trick pony.

"They time and again try to lower the thresholds to attract voters whose main issue is not migration," Tiberg said.
For example, the party this year said it wants the state to go in and help the counties and municipalities shore up full-time employment for its employees. That is a battle fought traditionally by the left and for women, the panelists pointed out. One third of Swedish women work part-time, while one in ten Swedish men do, party leader Jimmie Åkesson wrote in an op-ed this year.

"Åkesson himself said it was time to appeal to women," Cooper pointed out.

They may also, Uvell argued, be able to attract some old-fashioned Swedes like his own father – a man who wants low taxes, a strong military, and thinks quota system for women on company boards is fiddlesticks. The kind of voter that thinks the Moderates – in charge of the current conservative coalition government – is too meek (imagine Tory backbenchers).

"There is a potential for value-conservative voters," said Uvell.

Yet in reality, which Cooper's report showed, the Sweden Democrats tend very clearly to the mainstream left on the scale when it comes to one area – labour. For example, it wants to curb labour migration in favour of temporary guest worker visas – a line touted by the main blue-collar trade union LO.

So how do you shrug the one-issue stamp? There are other examples, the obvious being the Greens, who like the Sweden Democrats do not fear (at times, Tiberg pointed out, even appeared to relish) playing across party boundaries both to the left and right.

The panelists said many one-issue or mono-profile parties became acceptable to a wider audience only after cleaning up some of their more hardcore ideas. For the Greens, it was their criticism of economic growth. For the Christian Democrats, the panelists said that perhaps it was letting go of the party's anti-abortion stance that earned it Svensson (Average Joe) credibility on the Swedish political landscape.

What would the Sweden Democrats need to do to clean up their act in the eyes of a larger swath of the voters?

"Maybe if they said they wanted to cut immigration by 30 percent rather than 90 percent," TV4 political reporter Ann Tiberg queried.  "If they became more realistic."