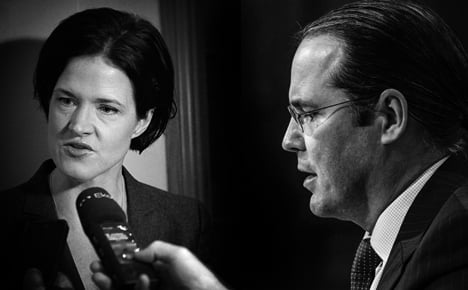 While Borg was quick to underscore that ruling the country was a "team effort", Prime Minister Fredrik Reinfeldt had to make do with second place on the list, published on Friday by Fokus Magazine.

Fokus political editor Torbjörn Nilsson explained Borg's rise was related to the fact that all actual power had been moved over to the finance ministry,

"Number two on the list lets this politician, who's never put his name forward in any internal election, do what he wants. Power in Sweden 2013 belongs to this newly short-haired man," the editors commented in the official list.

Jimmie Åkesson, head of the anti-immigration, far-right Sweden Democrats climbed to spot number five, up from 19th place in the 2012 ranking.

Anna Kinberg Batra of the Moderate Party also saw her star rise in the Fokus list, jumping from 15th to tenth place, the only other woman in the top ten besides Social Democrat financial policy spokeswoman Magdelena Andersson, who landed in ninth.

Fokus editors underlined that Kinberg Batra is a more likely successor to the leadership of the Moderate Party, and thus the bid for the prime minister post in the future, than Borg.

With two women on the list, 2013 represented a 100 percent increase in females in the top-ten compared to last year.

"Power is still a very sensitive topic. Everybody wants it, nobody wants to talk about it," Fokus editor-in-chief Martin Ahlquist wrote in an editorial that underlined two trends in this year's list. That many Sweden Democrats were advancing in the ranking and that the boundary between politicians and businesspeople was becoming increasingly blurred, a trend which The Local has reported on previously.

Ahlquist also pointed to the overwhelming whiteness of the list.

"It is striking to what extent our powerbrokers, regardless of what part of society they represent, are to a large extent light skinned," he wrote.

The first page of the Fokus spread, stretching all the way down to an oddly sun-burnt pic of former PM Göran Persson at spot 22, features people with Western European backgrounds.

Exceptions on the list included Social Democrat rising star Ardalan Shekarabi in 68th place and author Jonas Hassen Khemiri at number 95, although there are a number of other people on the list who may have family ancestry outside Sweden such as like Dagens Nyheter (DN) managing editor Peter Wolodarski, whose parents came to Sweden from Poland in the 1960s.

4) Stefan Ingves, head of the Swedish national bank the Riksbank