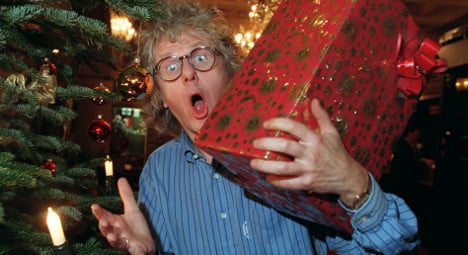 One in five Swedes admits to keeping Christmas presents they originally intended for someone else – and urban-dwelling Swedes are the greediest of all, with a quarter of Stockholm and Gothenburg inhabitants holding on to gifts, a new survey showed.

The survey, requested by eBay's Swedish site Tradera and carried out by market research company YouGov, found that 49 percent of Swedes treat themselves to something special on Christmas – not necessarily something meant for another.

"This year Swedes bought fewer presents for themselves, but were actually more likely to keep presents they meant to give someone else," Tradera spokesperson Jenny Pedersén told The Local.

Last year's survey did not break down the results by city, but found that 14 percent of Swedes kept presents they bought for someone else – a number which jumped to a self-indulgent 22 percent this year.

"If I’m totally honest I’ve even done it myself," Pedersén admitted with a laugh. “A couple of years ago I bought this scented candle that just smelled so heavenly. So I kept it and bought something else."

Pedersén added that the results were not too surprising, considering the ease of shopping during the holidays – especially online.

"Christmas is a high-time for shopping, and it’s okay to just click home presents. And people frequently buy gifts based on their own preferences, so it’s not that strange that they might like something so much they decide to keep it."

The survey also found that Swedes in the southern province of Skåne spend the most on Christmas, whereas residents of snowy Norrland are the least likely to get into the shopping spirit, a figure which puzzled Pedersén. She said that southern and northern Swedes buy about the same number of Christmas presents, but southerners appear to spend much more on other items, such as decorations and food.

"I imagine it’s because Norrlanders get Christmas spirit served to them on a platter," Pedersén joked. "It’s simpler, they don’t have to do as much. In Skåne they need to spend more money for it."