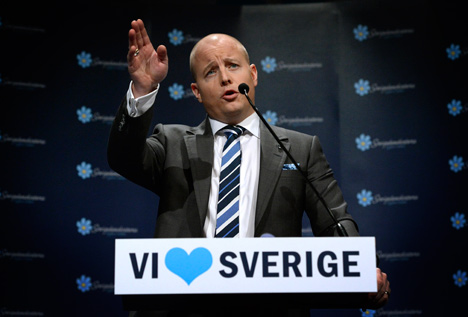 Sweden Democrat Party Secretary Björn Söder. Photo: Janerik Henriksson/TT
As delegates took their seats, they were welcomed by the theme tune to the Swedish film series Jönssonligan. An odd choice, as Jönssonligan refers to a trio of slapstick criminals. There was another accidental pop cultural reference at the conference centre in Västerås that fans of the Lord of the Rings trilogy may find amusing. A plastic tree, spray-painted white, standing in the lobby, looking oddly similar to the films' "Tree of Gondor" that would flower again once the (white male) king returned to fight off the barbaric hordes of southerners and their Arab-looking mercenaries.
One could forgive both friends and foes of the party for asking if it is an apt metaphor for the Sweden Democrats, or at least how they view themselves.
The Local is at the national meeting for two reasons. Sweden and not least the Swedish political establishment have tried for three years to figure out the black sheep in its midst. Secondly, the once-fringe Sweden Democrats are now the country's third largest party according to some polls, managing to complicate the parliamentary landscape, and poised to be kingmakers — or spoilers — after ballots in the September 2014 Riksdag elections are counted. While they today want to rebrand as socially conservative, their former leader Anders Klarström had clear ties with a Swedish Nazi organization.

When they got into parliament in 2010 with 5.7 percent of the vote, the Sweden Democrats found themselves sidelined on their core issue — immigration — by the coalition government, which forged a migration-policy deal with the Greens. Just this month, the main opposition party, the Social Democrats, said that if they take home enough votes next year, they are willing to set up shop with almost anyone – except the Sweden Democrats.

So what do the Sweden Democrats themselves think about how they've been treated by other parties?

"It's a strategy to tone down our influence," Party Secretary Björn Söder tells The Local. "The Alliance coalition does everything to tone down their own failures, while (Social Democrat leader) Löfven claims over and over that they don't adapt their suggestions to us, but they do."

He offers as an example the Social Democrat failure to secure an increase in job insurance payouts back in 2010 despite the Sweden Democrats signalling they were ready to support them. That example is contested by observers, however, and Söder admits he did not have access to the internal strategizing of the main opposition party.

"I am convinced that they have adapted to us, but it is possible there is a technicality that changed their tactics," he says.

As The Local reported on Wednesday, the small party has refused to define itself as either left or right.
"Sometimes we agree with the socialists, sometimes with the conservative government, sometimes with neither and then we go our own way," Söder says.
The most obvious points of contacts, he elaborated, were on welfare issues with the left, while the Sweden Democrats shared certain views with the conservatives on criminal justice issues and policing. Will his party, however, be allowed to speak up in the one area that has defined their political platform? A curb on immigration.
"I think they'll also continue to try to bypass us after the elections, but they will have to deal with this question eventually for pure self-preservation reasons," Söder explains. "We're growing, our voters think we have the best immigration policies, and as we take more of the other parties' voters, they will have to think of ways to lure them back."

This question also came up a recent event organized by liberal think tank Timbro in Stockholm, where political experts discussed the party's actual policies. Author Marcus Uvell commented at the time that the "Swedish people know one thing, they don't like bullying".

Söder's speech at the national meeting on Friday, as well as an introductory video, lambasted the Swedish media and political opponents for what they feel is an organized campaign against them.  So where can you find a neutral and knowledgeable summary of the party, given the fact that most Swedish newspapers have clear editorial profiles and none support the party? Perhaps the National Encyclopaedia can help:

"Sweden Democrats, SD, political party, founded 1988, with a stated aim to be a nationalist party. The Sweden Democrats have, however, mostly received attention for an aggressive attitude towards immigrants and have appeared as something in between a populist and a xenophobic party."

Their rise does shed light on a classic Catch 22 of democracy: the difference between structural democracy and the not-as-easily-defined concept of democratic values.

When readers of The Local were asked via social media what sort of questions should be posed to the Sweden Democrats at their national meeting, responses highlighted a curiosity about the party, but also people's gut-instinct rejection of it.

"How can they call themselves Sweden DEMOCRATS when they don't believe in democracy (all human beings are equal)?" asked one reader.

"Do they want to send Zlatan back to his home country? Even though he is the king of football? Do they even feel joy when Zlatan scores?"

"Why don't they take into consideration any of the research into correctional services when they draft their policies on crime?"

"What do they think about the Syrians coming to Sweden?"

"If they are as scared of the Americanization of Sweden as they are of Islamization? For example, that big banks have too much power, that American chains (like Starbucks, McDonald's, Levis, IBM etc) entrench themselves in Sweden, and that we are so happy to mimic the Americans' unhealthy diet?"

The Local has requested an interview with party leader Jimmie Åkesson during the conference in the hopes of having these and other questions answered. Söder, meanwhile, thinks other parties' refusal to work with the Sweden Democrats is tantamount to a rejection of Swedish democracy.
"If you are not willing to discuss things, there is a democratic deficit," he tells The Local.