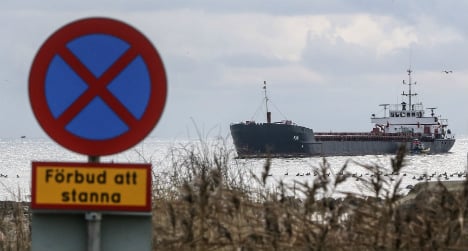 Photo: Anders Hillegren/TT
The 88 metre cargo vessel ran aground on Saturday morning by Ålabodarna between Landskrona and Helsingborg.
The captain was given a breath test and was found to be over the alcohol limit.
.
"The Coast Guard took a breath sample that was positive," said Marie Persson, information officer at Skåne police to the TT news agency.
The captain claimed in his defence that had only taken a drink after the ship ran aground. After further tests in hospital this claim was dismissed and the captain was arrested on suspicion of being drunk in charge.
No one was injured in the accident.
The ship was carrying grain and heading to the UK. The vessel remained stranded on Sunday morning and the Swedish Maritime Administration is now in charge of the operation.
"Now the Maritime Administration will make a judgment about when the ship can be removed, we have not detected any oil in the water," said André Johansson, duty officer at the Swedish Coast Guard, to TT.