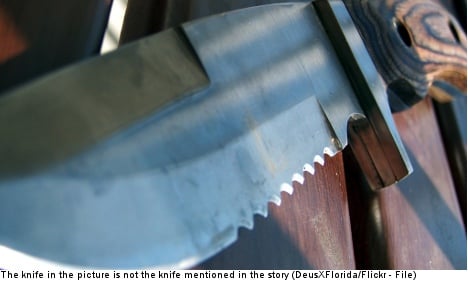 The 22 centimetre-long knife had been sitting in Andreas Persson's bag since last summer when he had brought it along on a fishing trip and then forgot it in the bag upon his return, the local Länstidningen Östersund reported.
Last week, however, Persson had his backpack in tow when he took a flight from Östersund-Åre airport in northwest Sweden to Stockholm.
Despite the presence of the knife, no alarms sounded when bag rolled through metal detectors, and Persson had no problems boarding the flight with a knife in his bag.
A few days later, Persson was checking in at Stockholm's Arlanda airport for his return flight and once again the bag with the knife passed through security undetected, leaving him concerned about the state of airline security in Sweden.
"You wonder how often security checkpoints make serious mistakes like this," he told the paper, adding that there must be something "seriously wrong" if his knife made it aboard two consecutive flights without being detected.
A spokesman for Arlanda airport was unaware of the specific incident, but told the paper there would be an investigation if a formal complaint was filed.