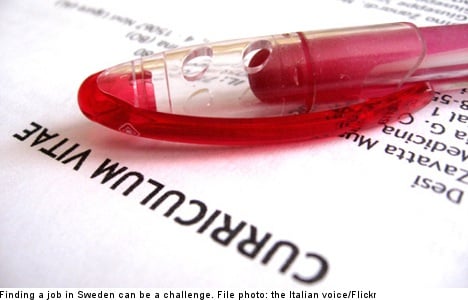 The figures come from a study carried out by Statistics Sweden between 2001 and 2013 that dealt exclusively with long-term unemployment in a European perspective. Researchers found that when it came to long-term unemployment in 2012, Sweden was the EU country with the largest gap between those born in Sweden and those born elsewhere, in terms of time spent unemployed.

The report found that Sweden nevertheless had one of the most promising records when it came to the percentage of the population that was unemployed long term, with 2012 records showing that only 37.1 percent of Sweden's unemployed were jobless for longer than six months, and only 18.9 percent for longer than 12 months. Norway was the only European country with lower long-term unemployed figures, clocking in at 35.7 percent for longer than six months, although 19.9 percent were out of work for 12 months or more. The 2012 EU average, meanwhile, was 62.4 percent.

But the most glaring discrepancy for Sweden was the difference between long-term unemployment times when comparing workers born in the country and those born elsewhere.

In 2012, 31.3 percent of unemployed workers born in Sweden were considered long-term unemployed. The corresponding figure for foreign-born workers, however, was 48.1 percent. In other words, almost one in two unemployed foreigners in Sweden endured an unemployment period of longer than six months, while less than one in three Sweden-born suffered the same fate.

No other country had such a large discrepancy, according to the study, which included the 28 EU member states and Norway. The only country with a marginally comparable statistic line was Norway, where 33.1 percent of the total unemployed domestic-born population was long-term unemployed, while 41.2 percent of those born abroad had a six-month or longer period of joblessness.

The report provides a somewhat different picture than another Statistics Sweden report published on Monday that found roughly seven of ten new jobs created in Sweden since 2006 went to people born outside of Sweden.