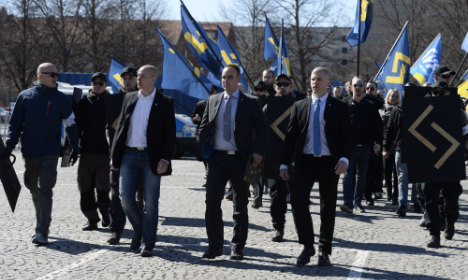 The Party of the Swedes demonstrate on May 1st 2013. Photo: Mikael Fritzon/TT
When Norra Skåne's deputy managing editor Anders Kauranen arrived at work on Monday morning he found the office cordoned off with the entrance adorned with tape and a sign which read "Stop. This building has been sealed with yellow-blue tape due to the anti-Swedish propaganda which is spread from here".
The action was claimed by Svenskarnas parti (The Party of the Swedes), which describes itself as nationalist and was founded in 2008 by members of the National Socialist Front (Nationalsocialistisk front).
"We can confirm that it is members and sympathisers of the party who are behind the action," Stefan Jacobsson, The Party of the Swedes' leader, told The Local on Monday.
Anders Kauranen has filed a report with the police.
"This is not on and we hope that the police take it seriously," Anders Kauranen told the TT news agency.
Several other newspaper offices arrived to find the same greeting on Monday with Östran and Hudiksvallstidning also targeted.
"It is not just newspaper offices, we have also targeted municipal buildings… Groups which we consider to support 'anti-Swedishness'," Jacobsson said.
Minnie Karlsson-Berne Falk, publisher of the Norra Skåne daily argued that the action should be taken seriously, arguing that it was an attempt to influence editorial decisions.
"We do not yet know who is behind it, but we have filed a police report. Furthermore, I'd like to underline that it is unacceptable to attempt to influence the newspaper and its journalistic mission, or try to prevent people getting in touch with the editor," she said.
Jacobsson however denied that the action was an attempt to influence editorial decision.
"They have the right to publish whatever they want, this is simply an attempt to stimulate debate," he told The Local.
"We are not alone, I understand . It's not the first time we have been subjected to this type of thing and we intend to file a report with the police," said Eric Arenius, news editor for the Östran daily.
A few weeks ago 15 town halls and several newsrooms around the country were targeted in a similar exercise. The police decided against proceeding with the case as they deemed the action to be "a symbolic gesture within the bounds of freedom of expression".
The phrases "anti-Swedish" or "enemy of Sweden" (svenskfientlig) and its polar opposite "pro-Swedish" or "friend of Sweden" (sverigevän) are common labels used by the Sweden Democrats and the far-right in Sweden to describe critics and supporters.
Jacobsson explained that the phrase refers to the "discrimination of Swedes" citing labour market opportunity and hate speech legislation as examples. 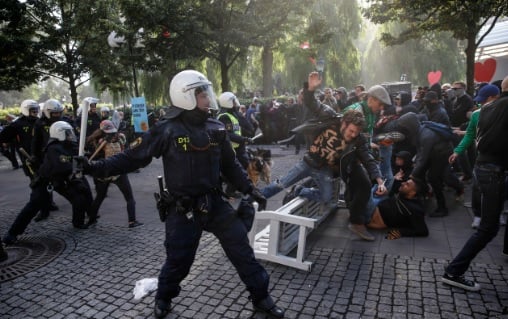 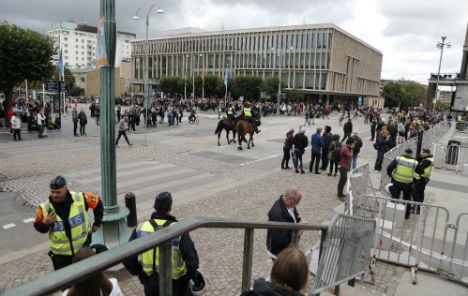