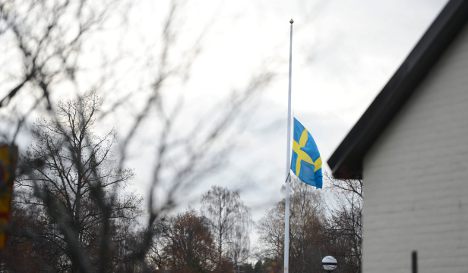 Swedish flag at half mast in the town of Ljungsbro near Linköping. Photo: Vilhelm Stokstad/TT
A 15-year-old boy and a 57-year-old woman died in the early hours of November 2nd. The man who has now confessed to the crimes was arrested in the vicinity and initially said he had no recollection of the events.
His lawyer, former justice minister Thomas Bodström, said on Monday that his client's memories remain fragmented.
"He still has only fragmentary memories, but he understands that it is he who has done this now," Bodström told broadcaster TV4.
Bodström said that the 33-year-old had expressed deep remorse over his actions.
According to an initial mental examination the suspect is most likely suffering from a serious mental disorder, according to the TV4 report.
At 2am on Saturday a woman alerted police that a man had broke into the basement of her house. The man was accompanied by two boys, born in 1998 and 1999. The woman ended up in a scuffle with the man and was able to free one of the boys with the help of her boyfriend.
The man is then believed to have left the house with the older boy. Another couple who were in a nearby house saw the man and came out to assist. The pair approached the 33-year-old man seeking to intervene after realizing from the screaming and shouting that it was no ordinary argument.
"I wondered what the hell he was doing. I thought at first he was standing there and hitting the hill," the boyfriend of the 57-year-old woman told the Aftonbladet daily at the time, explaining that he realized they were watching a boy being beaten with a metal rod.
The man then explained how the couple ran towards the offender, screaming at him to stop.
"He came at us like a madman. He was only a few feet away from us when I screamed."
The 57-year-old woman sustained a fatal blow in the ensuing scuffle. After initially being wrestled to the ground the man was able to flee from the scene. When police arrived with dog handlers, they managed to quickly find the man and detain him.

Filip Annas, a spokesperson for the Malmö police, said that the operation had been launched after a member of the public reported seeing a person with a “weapon-like object” at the entrance of the mall.

By 3pm, police stated that they had searched the entire shopping mall, had not found anything suspicious and no longer deemed there to be a threat.

On August 20th a 31-year-old man was shot dead in broad daylight in the shopping centre, while a woman who happened to be standing near to him suffered a bullet wound.