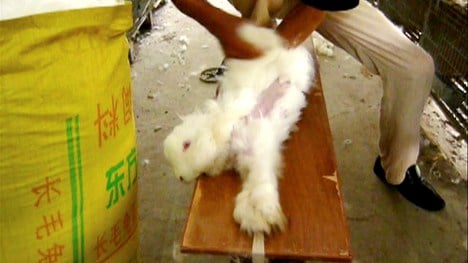 A scene from the Peta film. Photo: Peta Asia Pacific/TT

"We need to check to be sure if the producers are conforming to our standards," she said, although angora products already in H&M stores would not be withdrawn.

The Swedish fashion retailer's move marks a U-turn from five days ago, when it insisted that its suppliers met necessary standards and that it carried out routine spot checks to ensure that.

But that stance was met with sharp rebuke in Sweden, with critics saying that the checks were not entirely efficient while calling for angora products to be banned completely.

According to Peta (People for the Ethical Treatment of Animals), China produces 90 percent of the world's angora hair.

Its video (shown below) shows white angora rabbits at a variety of different farms in China tied to wooden tables in rooms filled with cages, as workers hold them down and tear off clumps of their fur by hand, while the animals scream in agony.

Another part of the video shows the rabbits pink-skinned after having their downy fur pulled off.

Warning: This video contains images that some readers may find unsettling:

Peta said its sources recounted that plucked angora fetched more money due to its length and quality, even though the method put the rabbits at more risk due to stress.

H&M's Swedish competitors Lindex, Gina Tricot, and MQ have all said they would stop producing and purchasing angora products as they could not guarantee that the supplies originated from ethical farms.

It is far from the first time the Swedish clothing giant has been implicated in corporate social responsibility (CSR) issues. Earlier in the week, however, H&M made international headlines for pledging living wages to factory workers in Bangladesh and Cambodia. The company stated its frustration with the local Asian governments for not taking the reigns in the matter.

"We believe that the wage development, driven by for example governments in some countries, is taking too long, so we want to take further action and encourage the whole industry to follow," H&M wrote in a statement on Monday.

"With size comes responsibility and we have the ability to contribute to change."