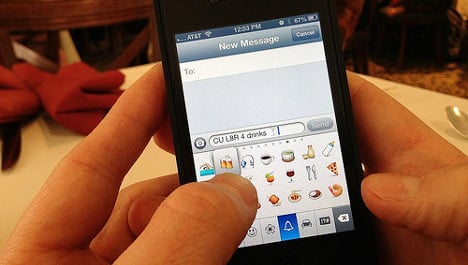 Photo: wonderlane/Flickr
"There is nothing that forbids it as long as it doesn't disturb the lesson," Kjell Hedvall of Sweden's National Agency for Education (Skolverket) said during a discussion on Sveriges Television (SVT) about discipline in Swedish schools.
When the topic turned to mobile telephones in the class, Hedvall said there was nothing in his agency's rule book to say it was wrong, but added that "it can always be discussed whether it's appropriate or not".
The televised discussion also addressed other areas that can cause friction between teachers and students, with Hedvall arguing that students wearing winter jackets or hats in class shouldn't be an issue either.
While there may be no "general rule" stating that mobile phones are forbidden in classrooms, Skolverket press officer Mattias Ragert expanded on Hedvall's comments, telling The Local that the statement shouldn't be mean that students should assume it's acceptable to whip out their phones the moment lessons begin.
"Every school has to make up its own set of rules, together with the teachers, students, principals – everyone," he told The Local. "Our agency doesn't think it's okay if students sit there playing, and if a school has rules against it then these should be followed."
He added that many schools have their own rules set up for dealing with phones, with some institutions insisting that every student hands their phone to the teacher at the beginning of each lesson, only to get it returned at the end.
"Of course, it's important that schools deal with phones. Students are there to learn, that's the point, and it's no good if the phones are disturbing the process," Ragert said.
The discussion took place in the context of an increasing difficulty on the part of teachers to maintain order in the classroom, with many reporting increased stress levels due to a classroom disturbances. The schools agency has recently developed a "staircase of measures" to help teachers in their attempts to keep unruly students in line.
The agency's rules stipulate that if a student is indeed disturbing the lesson, a teacher should ask them to stop, and can request the student leaves the room until the end of the lesson if more drastic action is required. A teacher can order the student to see the principal is the problem recurs.
The Education Act states that Swedish students should be educated in "a manner that ensures they have a safe and studious environment".