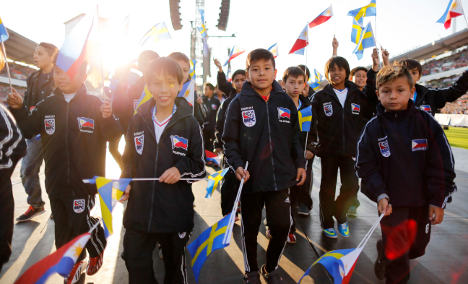 The Swedish National Board for Youth Affairs (Ungdomsstyrelsen) presented a report on gender equality in state funding of sports and cultural activities.

Director General Alice Bah Kuhnke said it was time to invite relevant players in the field to discuss issues of gender equality, as the report confirmed that 60 percent of state funding went to sports in which boys dominate. The sports in question included football, indoor bandy, and ice hockey.

The board itself hands out funding to sports and cultural organizations and noted in the report that 59 of its recipients are now male, an increase from 52 percent in 2010.

Some 60 percent of funds earmarked for cultural activities also went to the boys.

The large-scale review surveyed youth between the ages of 13 and 25, asking them questions about such varied fields as education, health, work, culture, and leisure activities.

"We also see other clear patterns within the leisure sector, such as 42 percent of the girls feel they don't have enough leisure time, compared to 28 percent of the boys," Bah Kuhnke said in a statement.

Both girls and boys sometimes refrained from taking part in leisure activities because they were scared of how they would be treated but again the girls were over-represented in that group. About 17 percent of girls responded that they had kept away from sports or culture due to such a fear, while 12 percent of the boys said they felt the same.

The survey also revealed, however, that girls spend more time exercising than boys do.

After the report was handed to the Swedish government, agency head Bah Kuhnke said it was time the youth affairs board takes the matter seriously. She said she planned to speak with representatives from both sports and culture about how to proceed.

"I will invite relevant players to analyze equality and how funding can be used strategically from now on," she said. "We can develop methods for their equality work and also highlight best practices."