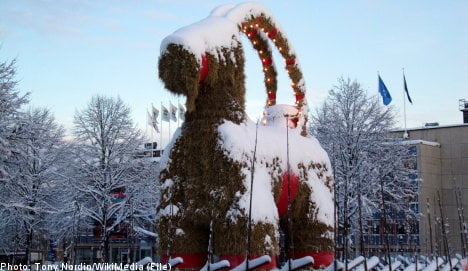 The Gävle Goat (Gävlebocken) doesn't usually last long. In fact, it has been torched by arsonists on more occasions than it has survived the Christmas period since it was first erected in the town's main square, Slottstorget, in 1966.
But this year, officials have soaked the hay in anti-flammable liquid in the hope of detracting would-be arsonists, although some locals have complained in the past that such a dousing turns the goat an uglier, darker shade. This was also the case in 2006 and 2007, two years the goat stayed upright.
Last year's 13-metre tall structure only lasted until December 12th before it too went up in flames.
So will the goat burn down this year?
"You never know, we've made it from material that's a little stronger this year, so it should be much harder to burn down," a spokesperson at the Gävle tourist office told The Local.
"But we're aware that the goat is only famous because it gets burned. It would be great if it didn't actually burn down this year, because that would be the most unexpected result. Then we might really get a lot of attention."
Indeed, the goat has made headlines in the past after Swedes tried to kidnap the structure by helicopter and after some youths got suspicious goat tattoos shortly after it burned down last year.  Once, an American tourist was convicted of arson after he burned it to the ground, thinking it was a harmless tradition and not realizing such an act was indeed against the law.

Good morning dear friends! Soon the whole me is with you, looking forward to it. I've missed you so!

The goat will be officially open to the public at 3pm on Sunday and a considerable crowd is expected to show up. Entertainment will be provided by Sean Banan.