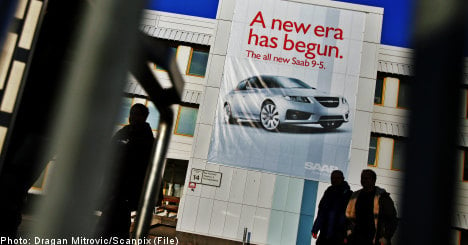 At the time of its bankruptcy in December 2011, Saab was working on a new version of its 9-3 sedan but was forced to stop due to a lack of financing.

Chinese-owned NEVS — which bought Saab out of bankruptcy in August 2012 — will pick up production of the petrol-driven sedan where the ill-fated company left off.

"It's very similar, you can't change or develop very-much in a year. We acquired the assets in August last year," said Östlund.

"Our focus has been to get the cooperation up and running with 400 suppliers and ensure the facilities were working."

The company aims to launch an electric version of the sedan in 2014, primarily aimed at the Chinese market.

"We are going to produce the chassis here in Trollhätten (western Sweden) and mount the batteries in China," said Östlund.

Saab teetered on the edge of collapse for nearly two years and was briefly owned by the Dutch car firm Spyker which became embroiled in a legal battle with Saab's former owner General Motors (GM).

A last-ditch bid to raise funds in China, with the Youngman group, was blocked by GM over issues concerning the transfer of technology and the company ended up in bankruptcy.

NEVS plans to adapt Saab's Phoenix production platform — replacing 20 percent of the parts originally sourced from GM — and to "make it a suitable platform for fully electric vehicles."

Oestlund said that the initial production run would be modest but he declined to give a figure.

"We don't want to make promises or forecasts we don't know we can fulfil — we are humble and say we'll start the production volume with low figures and be able to increase over time according to the market's demand," he said.

National Electric Vehicle Sweden (NEVS) is 78 percent owned by Hong Kong based National Modern Energy Holdingsa clean energy company, and the Chinese city of Qingdao which has a 22 percent stake.