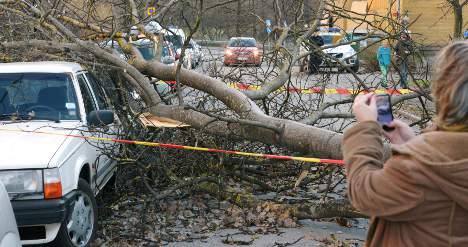 A tree falls on a car in Stockholm's Gröndal. Photo: Johan Nilsson/TT

Sweden's weather agency SMHI issued a class 1 warning, meaning there was a risk of damage to societal functions and public health.

"These are really strong winds, especially along the coast, but we're counting on it calming down during the evening," meteorologist Sandra Andersson told the TT news agency.

The warning remained in place on Monday morning, but only for the waters off the country's east coast.

The winds came with a low-pressure system moving across Sweden's north. Residents of Gothenburg and Stockholm were particularly hard hit by the wild weather, with around 16,000 Vattenfall customers losing electricity after trees were uprooted, pulling down power cables with them. Around 1,200 customers of Fortum were also struck by blackouts.

See what the weather is doing in your part of Sweden

While the winds had subsided in the capital by Monday, winter temperatures appeared to be here to stay with the mercury hovering around 1 degree Celsius.