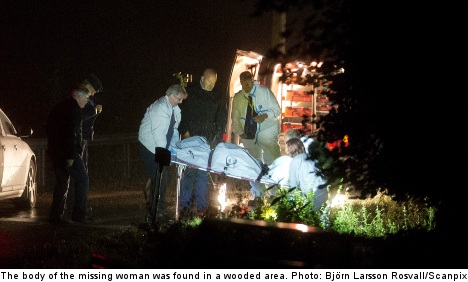 The woman was found dead in the forest in early August by a hunter who was investigating a "suspicious odour" in Trollhättan municipality, after she had been missing for almost six weeks.

On Monday, a 36-year-old man was charged on the suspicion of murder, and another two men, aged 32 and 35, were charged for abetting the murder.

The suspected murderer is believed to have killed the woman through excessive violence to her body and head, although prosecutors said that the autopsy was hampered by the fact that the woman's body had been left out in the summer sun for so long.

The murder was carried out in the woman's own apartment, where her one-and-a-half-year-old son was at the time.

"We don't know if he saw anything," prosecutor Per Erik Rinsell told the TT news agency, referring to the child. "But we know he was left in the apartment and found by police 15 hours later. He was dehydrated and was not feeling well, and was taken to hospital and treated. He was not seriously injured."

There was a host of evidence used by the police, including security camera footage, blood traces, footprints, and DNA, which contributed to the charges being filed.

All three men have denied their involvement in the murder, and police have held a total of 450 official interrogations.

"We don't have one single piece of evidence for the prosecution. We have no quick fix but many different parts that make up the whole," Rinsell added.

The 36-year-old turned himself in to the Swedish embassy in Warsaw, Poland, in August and was extradited to Sweden.