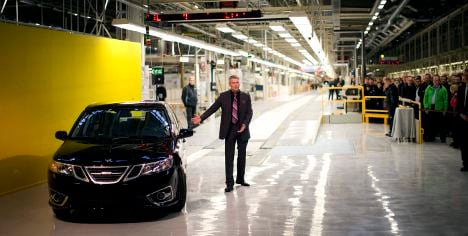 The first Saab off the new line is shown to the public. Photo: Björn Larsson Rosvall/TT
When Saab went belly up two years ago, some 1,400 IF Metall union members lost their jobs. On Monday, the atmosphere was more up-beat at the regional union office.

“Rumours of my death have been greatly exaggerated,” joked ombudsman Leif Håkansson, paraphrasing Mark Twain. “Saab has always shown proof of a remarkable ability to survive.”
While around 180 members now work at the plant today, the union hopes the carmakers will gradually pick up the tempo on new employments.
“While most of the Saabare (Saab workers) either found new jobs or went into education, we are hoping Saab will continually employ in the future and that sub-contractors can grow in town again,” Håkansson said.

The new fleet of Saab 9-3 Aero Sedans was rolled out just before 2pm in the Saab factory in Trollhättan, western Sweden, with Enterprise Minister Annie Lööf on hand to witness the event. The cars were revealed by new owners National Electric Vehicle Sweden AB (Nevs), but not without “many difficulties”, according to company founder and owner Kai Johan Jiang.

“Today, I am proud and happy,” Kai Johan Jiang told reporters. “I knew it would be a tough journey to get production going. But I didn't realize there would be so many difficulties. If we solved ten problems, there were five new ones right away.”

The vehicle, which is powered by a turbocharged gasoline engine, is set to hit the market next week in Sweden at a retail price of 279,000 kronor ($42,575) or 289,000 for the automatic variety. An electric version will be released in China next year.

Annie Lööf cut the blue and yellow ribbon to officially launch the proceedings.

“This is a special day. I was there two years ago when the bankruptcy became a sad fact. I am truly glad that it can be reopened, not least for the sake of the employers,” she said.

Saab filed for bankruptcy at the end of 2011, after teetering on the edge of collapse for nearly two years, and was briefly owned by the Dutch car firm Spyker which became embroiled in a legal battle with Saab's former owner General Motors (GM).

A last-ditch bid to raise funds in China, with the Youngman group, was blocked by GM over issues concerning the transfer of technology and the company ended up in bankruptcy. Nevs is 78 percent owned by Hong Kong based National Modern Energy Holdings, a clean energy company, and the Chinese city of Qingdao which has a 22 percent stake.

At the metal workers union, Leif Håkansson said Saab's ownership had changed before and that despite the turbulence in recent years, the workers were now looking ahead rather than worrying about the future.

“There is always a risk, but today, the only thing we are talking about is Saab being back on the road,” he told The Local.