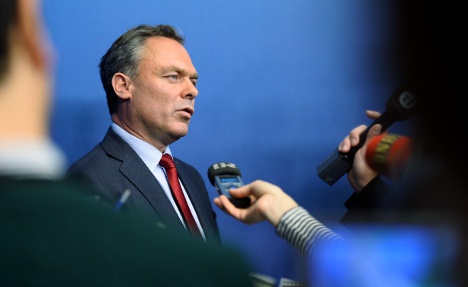 Education Minister Jan Björklund. Photo: Leif R. Jansson/TT
"This is the final nail in the coffin for the old school reform," said a pensive Jan Björklund as he welcomed reporters to government headquarters Rosenbad in central Stockholm following the release on Tuesday of the OECD's annual ranking of schools in 65 developed countries and economies. He nonetheless made sure not to lay all the blame for the tumble in maths, reading, and natural sciences at the door of the politicians in charge at the time.
"The downturn was expected, it's been ongoing for 20 years," Björklund summarized. "Regardless of who is to blame, the pupils (measured in the latest Pisa) went through the old school system."
According to the latest Pisa results released on Tuesday, Sweden now ranks below the OECD average in all three subject areas, faring worse than the United States and the UK.
The Liberal Party politician said he had taken the opportunity to reflect on things his own government could have done to hit the brakes on the slide – including wresting power from the municipalities, which were put in charge of running schools back in 1991, and once again managing schools on a national level.
"We should have made them state-controlled schools again back in 2006 or 2007," he said in reference to the government taking power in 2006. "To lift the results requires competence that the 290 municipalities don't have."
He also stayed true to his oft-cited concern about "pupil-led education", in which students are expected to take responsibility for their own learning.
"We should have put the focus on teacher-led education (katederundervisning) much sooner," he said, adding that boys did not fare as well as girls did in the less-structured system.
Earlier this year, Björklund told The Local that he admired the focus on rules and decorum at the free-school consortium The International English School.
"The English School could be a role model for municipal schools," he said.
The minister remained upbeat, despite Sweden's unparalleled tumble in the rankings, that the trend could be reversed. The worst thing that the opposition could do, he told The Local on Tuesday, was to go back to the old system if they take power in next year's elections.
Björklund took the opportunity to present the head of a new schools agency, Skolforskningsinstitutet, Professor Per Thullberg, who at the press conference said that a raft of education reforms introduced by the government in 2011 – including licences for teachers and national testing from grade three –  would hopefully make a dent in the poor results "by the end of this decade."
The opposition, however, said Björklund should not shirk responsibility for the poor results.
"It's everyone's fault but his own," Green Party spokesman Gustaf Fridolin wrote in an op-ed in Aftonbladet on Tuesday. "There are several countries that have reversed a (negative) trend, strengthened the pupils' knowledge of math, and increased the number of applicants to teacher training in significantly shorter time than Björklund has had as minister."