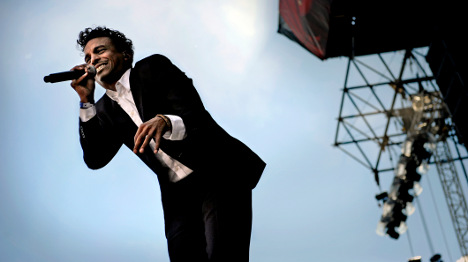 Diakité recorded the song Black Doves And Wilted Lilies ('Svarta duvor och vissna liljor') with the hip-hop group Kartellen. It contains the phrase "Jimmie blue and yellow, hoist him on the flagpole", in reference to the leader of the Sweden Democrat party, which has long been seen as a one-issue party wanting to curb migration to Sweden.

As Diakité was recognized for his work against racism by the 5i12 anti-xenophobia organization, upset Sweden Democrats said politicians should stay away from the awards ceremony to be held in the Swedish parliament.

"I also assume that other parties find this odd and that they therefore won't bestow the honour of their presence on Timbuktu," Sweden Democrat spokesman Linus Bylund told the TT news agency as the debate about Timbuktu's lyrics intensified.

5i12, a two-decade old anti-racism organization that now gives out its annual prize in the Riksdag, said they were bestowing Timbuktu with the award because "he has shown how you can, both in word and melody, combine a significant artistry with a personal commitment to important societal issues." The award citation also said the artist had helped with several valuable humanitarian projects across the world.

On Thursday, however, the speaker of parliament said he would not attend the ceremony. In a letter to the Svenska Dagbladet newspaper, Per Westerberg said "as speaker, I avoid all awards ceremonies that can be perceived as controversial".

In the eyes of many Sweden Democrats, Timbuktu's choice of lyrics were not just controversial, but offensive and illegal. Gabriella Hedarv, a columnist in the party's own paper  SD-kuriren, said Timbuktu should be stripped of the honour of singing at the Nobel Peace Prize ceremony in Oslo next week as he "threatens the life of democratically elected politicians".

Hedarv was herself criticized for what she said was a sarcastic parody of the text in Black Doves And Wilted Lilies. When one of her party brethren complained on Facebook that her neighbour had loudly played the Timbuktu tune with open windows, Hedarv commented "Can't we just beat her yellow and blue and hoist her in the flagpole?" (Editor's note: the Swedish expression 'blue and yellow' is the equivalent of the English colloquialism 'black and blue', but also represents the Swedish flag).

When anti-racism magazine Expo questioned Hedarv about her choice of words, the columnist intimated that the Timbuktu-playing neighbour had opened herself up for a legitimate tit-for-tat attack because playing the song meant that the neighbour "considered such expressions to be okay".

"I was sarcastic," Hedarv told Expo.

The lyrics have also caused a stir at Swedish public broadcaster Sveriges Radio, which by law is supposed to stay politically impartial. As the debate about Timbuktu's text raged, music editor-in-chief Jonas Westman said last week the radio would continue to play the song, but that DJs at station P3 would make sure not to let the tune go without commentary.

"If we play it, we'll play it in a context where we are also talking about it, rather then having it play in an uncommented flow of music," Westman said.

"The lyrics are fiction, it's a cultural thing, it's like a fantasy thing," he added. "But as we approach two upcoming elections, and with this song taking a very clear standpoint, we at public service have to protect our impartiality."

"In my eyes, Jimmie is the one exercising psychological violence on that which is yellow and blue, in other words the country, the people. It is pure and simply a play on words, which isn't just permissible in the arts, it is elegant, necessary, and further underlines the difference between a song and a political manifesto," Timbuktu wrote.