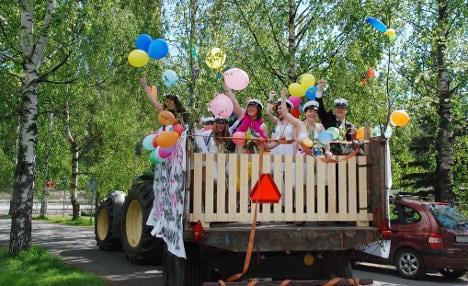 No other country has fallen so abruptly as Sweden in maths over a ten-year span. Overall, not one of the other 32 countries included in the OECD's Programme for International Student Assessment (Pisa) survey has seen its students take such a beating in their studies.

"The bleak picture has become bleaker with the Pisa review that was presented today," Anna Ekström, head of Sweden's National Education Agency (Skolverket), said after she became privy to the results. She had hoped for Sweden to finally buck the trend and stop declining in the ranking.

Sweden's schools now rank below both the United States and the UK according to the Pisa rankings.

Top of the list this year was Shanghai, whose students placed highest across all three areas. The four Asian Tigers –  Singapore, Hong Kong, South Korea and Taipei – were not far behind, with regional neighbours Macao and Japan also performing well.

Across the surveyed countries, the average score in maths was 494 points this year. Hong Kong, for example, reached 613 points. Sweden's neighour Finland, meanwhile scored 519. In contrast, Swedish 15-year-olds scraped together a mere 478 points, a drop down from a score of 500 points in the last Pisa survey. Back in 2003, the Swedish students scored 510, which meant the drop to today's result testified to Sweden crashing down the points scale in maths over the past ten years.

The Pisa test also looks at reading comprehension. This year, the OECD average came out at 496. The Swedish teens were not far off with 483 points, but the result looked less perky when compared to the score of 516 the Swedes mustered back in the year 2000.

Shanghai scored top honor with 570 points. In Europe, the best performers were the Finns with 524 points, but also they slid in the rankings somewhat. Denmark, Norway, Estonia, and Latvia all outperformed Sweden, while Iceland came in at the same level.

In the natural sciences, finally, the OECD average was calculated at 501 points this wear, with Swedish teens scoring 485.

"We're losing ground on all fronts and find ourselves in a very precarious position," union head Eva-Lis Sirén said in a statement, adding that Sweden's results had "sunk like a stone".

"We're losing not only those who are having a hard time, but also high-performing students."

Sirén accused politicians of pulling Sweden in the wrong direction when it comes to education policy, arguing increasing differences between Swedish schools is to blame.

"A lack of equality is the price Sweden has had to pay as a result of free school choice. That's a price we can never accept," she said.

The union head was also critical of recent reforms, claiming they left teachers overwhelmed with administrative tasks. She expressed fears that the teachinng profession had "lost its status" at a time when tens of thousands of new teachers need to be recruited.

"If we're concerned about the results today, we have every reason to be worried about 2020," Síren said.

Tobias Krantz, head of education policy issues for the Confederation of Swedish Enterprise (Svenskt Näringsliv) and a former Minister for Higher Education and Research, called the Pisa report "very concerning".

"There is a lot of global competition and it's very concerning that we're falling so far in maths, but also in other subjects," he told the TT news agency.

Krantz warned that the results could be a precursor to higher unemployment.

"When companies decide where they should place their operations, they want to know there will be competent employees and if knowledge in schools is falling, Sweden will be less attractive for important investments," he added.