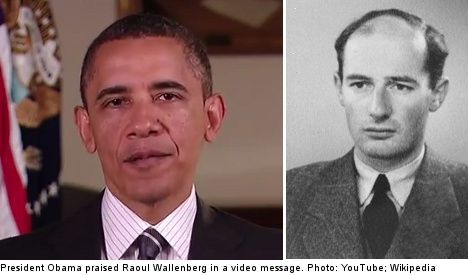 Wallenberg was posted as a Swedish diplomat to Nazi-occupied Budapest in July 1944 and rescued tens of thousands of Jews by issuing them protective passports in the final months of the Holocaust. He went missing after his arrest by Soviet forces in Hungary on January 17, 1945.

Obama met with Wallenberg's relatives during a visit to Stockholm in early September and promised the Swedish diplomat's 92-year-old half-sister Nina Lagergren to raise the issue of his fate with his Russian counterpart on the sidelines of the G20 summit in Saint Petersburg that month.

But the family has received little feedback since then, von Dardel said.

"We don't know if Obama brought up this case when he was in Russia," she said.

Soviet and later Russian officials have claimed Wallenberg died of heart failure in Soviet custody on July 17, 1947, but have never produced conclusive proof. Sceptics have questioned that version, with some saying he was executed.

Von Dardel's mother, 91-year-old Matilda, the widow of Wallenberg's half-brother Guy, complained in a letter to Obama last week that the family had not received a proper response to queries it addressed to him in September.

In the letter, seen by AFP, she harshly criticized a response earlier this month from State Department Holocaust specialist Douglas Davidson on the president's behalf.

"I wish to convey to you my thorough disappointment and dismay with Ambassador Davidson's note," she wrote, saying it had "a degree of detachment and bureaucratic rationalization that froze my heart."

In his letter, dated November 8 and seen by AFP, Davidson emphasized Washington's backing of the 2009 Terezin declaration that mainly focuses on the needs of Holocaust victims and restitution of Jewish assets stolen by the Nazis during World War II.

"While Raoul Wallenberg was certainly engaged in rescuing Jews from the Holocaust, he himself did not fall victim to Nazism, but to Communism," Matilda von Dardel said, questioning whether the declaration would even apply to Wallenberg.

The Terezin declaration urges governments to make their archives available to researchers, but von Dardel wrote that Russia was not "complying with the letter or spirit of this agreement.

"That is precisely why we turned to you for assistance. Instead, all you are doing is to move us in circles," she wrote.

Wallenberg, who had been working with the US War Refugee Board in Hungary and was made an honorary US citizen in 1981, deserved better, she said.

Davidson's letter, she wrote, "contained not a single reference to Raoul Wallenberg's successful work on behalf of the US government or the slightest sense of recognition, gratitude or commitment to a man whom Sweden and the US sent out on a highly dangerous mission without adequate protection.

"After almost 70 years of struggle, Raoul deserves better from the country whose reputation as a humanitarian haven he helped cement," von Dardel said.

Swedish foreign ministry spokeswoman Catarina Axelsson told AFP the country would welcome US involvement to get answers, but stressed that "Sweden is taking care of the concrete handling of this ourselves."

Louise von Dardel meanwhile insisted that she and the rest of the family would keep pushing for answers.

"We will never give up," she said.