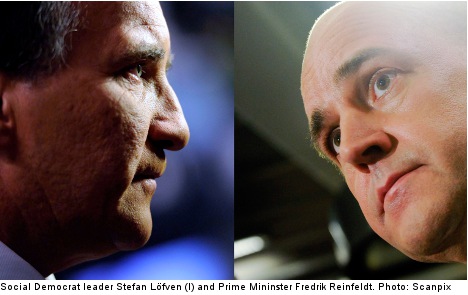 The Sweden Democrats saw voter support rise by 1.6 percentage points since May, bringing their overall level of support to 9.8 percent.

The results put the party, which campaigns on a populist, anti-immigration platform, ahead of the Green Party which tallied a 0.3 percentage point rise to 8.8 percent, according to the November Political Party Preference Survey carried out by Statistics Sweden (SCB).

Support for the ruling Moderate Party, meanwhile, fell by 1.4 percentage points to 25.5 percent, their lowest level of support since at least 2009.

The Moderate's coalition partners in the ruling centre-right minority government posted mixed results, with the Liberal Party (Folkpartiet) losing 0.6 percentage points to land at 5.6 percent, while the Centre Party (4.7 percent) and the Christian Democrats (4.1 percent) both posted gains of 0.5 percentage points, keeping them above the four-percent threshold for representation in parliament.

Combined support for the current government landed at 39.7 percent, according to the SCB figures. The three centre-left opposition parties, meanwhile, have support of 49.8 percent of voters, enough to unseat the government, but not enough to claim a majority.

The semi-annual survey is considered to be one of the most rigourous of the myriad voter sympathy surveys carried out throughout the year, giving it added weight among political observers.

The results are based on responses from 9,000 telephone interviews carried out over the course of a month in which participants are asked which party they would vote for if an election were to be held in the coming days.