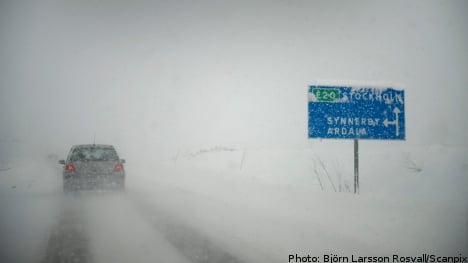 A file image of a previous snow storm in Sweden

Swedish weather agency SMHI called Wednesday the "calm before the storm" as it issued class 2 warnings for rough seas off Sweden's west coast, as well as for strong winds and snow in Dalarna, Gästrikland, and Uppland across central Sweden.

A class 2 warning entails weather conditions that could put the public in danger, cause material damage, or disrupt vital public services.

On Thursday, the low pressure system is expected to reach southwestern Sweden, with "large amounts" of snow expected to cover the Götaland and Svealand regions in central Sweden overnight into Friday.

Wind gusts as high as 100 kilometres per hour are expected along with the heavy snowfall.

"In some areas, we may be talking about up to 20 or 30 centimetres," SMHI meteorologist Marcus Sjöstedt told the Aftonbladet newspaper.

"There are definitely going to be problems on the roads and for different types of transport. People should expect a number of delays when it comes to trains."

Sweden's National Transport Administration (Trafikverket) is on "high alert" ahead of the storm, with officials warning motorists in southern Sweden to consider leaving their vehicles at home on Thursday while at the same time taking precautions to reduce the risk of delays on the rail network.

"We've learned from other storms over the years and are meeting with transit operators to take joint decisions to reduce traffic," agency spokeswoman Bodil Sonesson told the paper.

Transit authorities have already cancelled trains on the Malmö-Ystad-Simrishamn route across Skåne during Thursday and Friday.

Between noon on Thursday and 2pm on Friday, no trains will travel on the route, as it is especially prone to problems during periods of high winds and snowfall.

Several ferry departures have also been cancelled, with the Polferries/Unity Line connecting Ystad and Świnoujście in Poland.

Temperatures on Thursday are expected to range from around zero in central Sweden down to -20C in the north of the country.

By Saturday, Sven is expected to move eastward out over the Baltic, with isolated snow showers continuing in some parts of eastern Sweden. A high-pressure system expected to arrive on Sunday will bring clear skies and cooler temperatures before milder temperatures return next week.