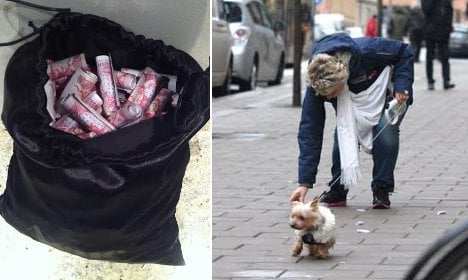 The bag of 'cash' and one Stockholmer who found one. Photo: Private

Madelene Dorodny, 22, is a digital media student at Stockholm's Hyper Island and she's soon to be homeless.

After her landlord took advantage of recent subletting rule changes and upped her rent by 2,000 kronor ($305) a month, she's been forced to find something more affordable.

But the usual channels like Swedish buy-sell site Blocket have proved fruitless.

"I've tried Blocket two or three times, but nobody pays attention when you're a foreign student. All you get offered is a place in the outer suburbs for 12,000 kronor a month," she told The Local.

Add to that the fact that the student, who has been in Stockholm for two years, doesn't have a full-time job and her network of mostly international students doubles as her competition in finding a home.

So she turned to Guerilla advertising.

On Tuesday night, she took to the streets of trendy western Södermalm and dumped what appeared to be rolled-up 500-kronor notes.

But the apparent cash-drop actually consisted of phony bills with her housing advert printed on the back, reading:

She put 500-kronor adverts in the entrances of apartments, and scattered them around the street where people were likely to find them.

"We hung around and watched people picking them up. It felt kind of bad to confuse people like that, but catching their attention was the whole point. And it's about reaching people who might be able to help, not just the people looking on Blocket," she said, adding that people hardly pay a second glance to adverts in the metro or at the supermarket.

The problem with the Stockholm housing scene for foreign students, Dorodny believes, is that it all boils down to greed.

"I think people have become so greedy, they're making an insane amount of profit, and it sucks for people who want to make Stockholm their home. I want to be here, but it's so hard to blend in and integrate when you can't even get a place to live in the city," she lamented.

While no one has responded to the plea as yet, California-native Dorodny is planning a second drop in Vasastan before the inevitable Swedish winter snowfall.

"I just hope the city doesn't get angry at me," she told The Local.

DON'T MISS: The Local's Property of the Week