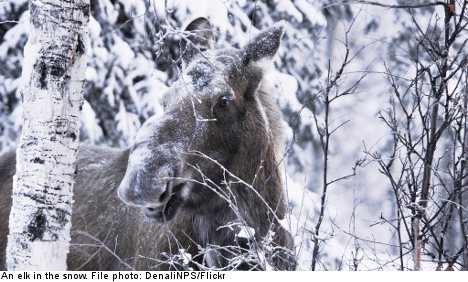 The elk tower shook as Jens sprang to his feet, grabbed his rifle and prepared to shoot. I was rousted from my snooze and also rose to my feet, but far too quickly. I banged my head on the roof of the tower and, reeling from the impact, knocked over my cup of coffee and the little foldable table it had been sitting on.

“Ah, damn it!” I shouted, although I’m pretty certain my language was of a rather more industrial nature. I also nearly knocked Jens off his feet, as I stumbled around the enclosed space like a bear that had just been hit by a tranquilizer dart.

“Sssh, pucko”, Jens muttered (or that’s what it sounded like to my still-untrained ears).

I finally stopped pin-balling around the swaying structure and stabilized myself. Jens had the rifle up to his shoulder and was looking out onto the edge of the clearing. There was a dog barking and the sound of undergrowth being trampled by something very heavy. My first-ever elk hunt was finally going to see some action.

It had been a slow, but very early start. I’ve never been a morning person, but early mornings in autumn in northern Sweden are quite wondrous. The drive to my friend Låge’s at 6.30am through a misty, frosty landscape was so utterly lovely that I drove slowly in order to properly savour it.

Låge and I were allocated an elk tower and off we went. It was a gorgeous morning and as we sat in the stand sipping our coffee and nibbling at sandwiches in the middle of a clearing in the woods, I totally understood the attraction.

“Of course, it is better to see a moose but this is a great excuse to get out into nature at a time of year when there’s not much going on,” said Låge. Låge is a gentle man but a northern man. He does not understand the concerns of animal rights advocates. “We have many moose, so many that they cause lots of car accidents. Hunting is a great way to keep their numbers down. And we don’t just kill them for fun. We eat the moose and use the hide so nothing is wasted.”

Each hunting group is allocated a certain number of animals they can kill each hunting season (usually September/October). Låge’s group was allocated six adults and six calves.

“We still have four calves from our allocation – we have not seen many calves this season. I think there is a bear in the area. There are more and more bears in this area as they follow the reindeer as they migrate down from the mountains in the winter and some bears stay. I still have not seen a bear but I am told that there are more around here now.”

In Sweden's far north, where distances between towns are huge and pubs are rare, hunting also offers a social outlet. After a fruitless but lovely morning chewing the fat and drinking coffee in the wilderness we met up for lunch with the rest of the group over a small, intense fire. The crack was mighty. They may not have shot anything but, over the half-hour break, the group did not stop laughing. So much for dour northerners.

For the afternoon session I went back out with Jens, a farming machinery mechanic with a permanent wad of snus lodged in his top lip. “I love to hunt. I love the chase, the nature and even the kill. But it’s the time I spend with my friends that I value most. I don’t get to see them too much otherwise. Life takes over.” He stopped and smiled. “You know, I haven’t even seen a moose this season, never mind shot one!”

An hour later, Jens, ignoring the English clown stumbling around next to him, fixed his sights on the horse-sized calf that had trotted into the clearing 30 metres from us, startled by the barking of the group’s hunt dog. He fired just the once and the calf collapsed, killed instantly by a shot to the head. Jens turned to me and laughed. “You brought me luck! You must come out again!”