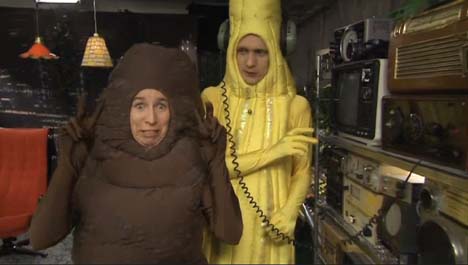 A screenshot from a recent episode of 'Kiss och Bajs' on Barnkanalen. Photo: SVT

The Russian state channel Rossiya 1 surprised viewers by showing a segment from popular Barnkanalen show 'Kiss och Bajs' during a report about protests in neighbouring Ukraine regarding their relationship with the EU.

Ukrainians, who favour closer ties to the EU, have taken to the streets of Kiev to demonstrate after the government rejected an EU agreement in favour of stepping up their relations with old allies Russia.

Kiss och bajs (wee-wee and poo-poo) shows children how their body works using adults dressed up in costumes. It was slammed by Rossiya 1 news anchor Dmitriy Kiselev who said the show was a sign of things to come if Ukraine decides to join the EU.

Kiselev was also scathing about Sweden saying there has been a "sharp rise in child abortions, early sex is the norm – from the age of nine, and it is not surprising that child impotence starts at 12. There you have European values in all their glory."

Being featured on Russian state television came as a surprise to Kari Hamforms Wernolf, who plays the sausage poo Bajs on the Barnkanalen show, who said the Russians have "taken the show out of context."

"In a way you become a little bit startled about it but above all I feel it is a comedy programme that we are all very proud of. We don't see it as something that is political or that could be a problem for democracy in any way," Wernolf told Aftonbladet.

Meanwhile the boss of Barnkanalen, Safa Safiyari, rejected claims that the show represented decadent western values saying "absolutely not" and added that the programme was popular with children as well as parents.

Even Sweden's Foreign Minister Carl Bildt has weighed in on the matter telling Aftonbladet that the Russian TV report was full of inaccuracies.

"The Russian news anchor can think what he wants about a Swedish TV show but the Russian TV program has obviously had better moments. The feature lacked objectivity, had factual errors and breathtaking conclusions," Bildt told Aftonbladet.

The former prime minister said it was important to point out an inaccuracy in the report that Ukraine couldn't have trade agreements with both the EU and Russia saying they "certainly can" enjoy both.

Outspoken Russian anchor Dmitriy Kiselev has developed a reputation as a firm EU-sceptic saying that if Ukraine was to join the EU it would be entering into a "Euro sodom." He has also attracted criticism for his right-wing views on homosexuality and for likening any Russian enemies to the Nazis.

Russia's embassy in Stockholm have yet to comment on the matter.